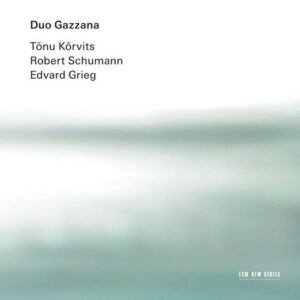 Sisters Natascia Gazzana, violinist, and Raffaella Gazzana, pianist, have recorded a number of releases for ECM that program a combination of great romantic chamber works and contemporary fare. On their latest, they present romantic works by Robert Schumann and Edvard Grieg alongside contemporary pieces by Tõnu Kõrvits. The latter does a great deal to balance the former two, providing a less effusive tone and tangy harmonies.

Kõrvits’s Stalker Suite (2017) opens the recording. It was written for the Duo Gazzana and dedicated to the filmmaker Andrei Tarkovsky. The piece is titled after the film Stalker, which has its own distinctive score, but Kõrvits does not quote from it, rather taking moods and reference points from the film as springboards into original music. Kõrvits combines harmonies and gestures from romantic tonality (a linkage with the recording’s other works) and with post-tonal crunches and extended techniques such as col legno glissandos and strummed piano bass strings. After the mysterious atmosphere of the suite’s first movement, “Into the Zone,” the second, “The Room,” takes on an Ivesian cast, exploring two against three rhythms and a haunting melody. Natascia Gazzana gets a solo turn in the third movement, “Monologue,” which begins with melodic fragments that combine and build into an ascending line of considerable beauty, adorned by harmonics and double stops. The final movement, “Waterfall,” incorporates whole tone scales and other signifiers of water borrowed from Debussy and Ravel. Descending octave passages in the violin are tightly tuned, and limpid flurries in the piano’s right hand provide a lovely sense of lassitude.

The Schumann Sonata in A Minor for Violin and Piano (1851) is one of the composer’s finest pieces of chamber music. Cast in three movements, it is filled with interpenetration within and between sections, most famously having the first theme from movement one returning near the very end of the piece’s conclusion. Schumann also crafts several of the themes to be well suited for canonic deployment, which he does throughout the piece. The work is dedicated to Clara, for whom Schumann wrote a formidable piano part, making the piece a true duet. After the complex sonata construction of the first movement, the second movement is a fascinating amalgam of slow movement and scherzo – almost like  the second and third movement forms of a four movement work are bound together. It also explores some distant key relationships. The final movement has rondo-like features, but is far more motivically diverse than the average final movement, incorporating various thematic transformations, including the aforementioned return of material from movement one. Duo Gazzana provides an abundantly clear interpretation that underscores all of the dynamic contrasts as well as counterpoint and intricate harmonies.

Four Notturni (2014) by Korvits follows. Spare, song-like, with evocative melodies that often take a Messiaen-like or Bartokian modal cast. Elsewhere polytonal and polyrhythmic facets coexist, once again creating an Ivesian cast. The final nocturne somewhat resembles a Debussy prelude. Despite all of these surface influences, Korvits creates in a space all his own. Duo Gazzana are fine muses for him.

The recording concludes with Grieg’s Sonata in C-minor for Violin and Piano (1887). It is interesting to hear this paired with the Schumann sonata. Grieg’s frequent alterations of motives and rhythmic patterning owe a debt to Schumann. The first movement opens with a muscular theme that is succeeded by a number of smaller, often furtive moments. Natascia Gazzana’s sumptuous tone in high-lying passages complements Raffaella Gazzana’s richly sonorous playing. The intervening 36 years between the Schumann and Grieg sonatas had ceded at least one half of the playing field to Richard Wagner, and passages in Grieg’s sonata employ the cascades of diminished seventh chords and spacious breaths between phrases found in Wagner’s operas. The other side of romanticism, the Brahmsian, isn’t ignored, with a number of secondary motives sounding like the folk material of his colleague Dvořák. Thus, the piece is a bounty of disparate musical material.

The second movement also makes a nod to the Schumann piece, combining slow and scherzo material, marked “alla Romanza.” A true “hit tune” of the late nineteenth century, in E-flat major instead of tonic, is haloed with tenderly voiced harmonies. A central melody takes up the scherzo rhythm with violin pizzicatos, then a minor key variant on the motive, with  the piano playing a syncopated tune. After a modulatory transition, the original motive returns, with tremolos in the piano and the violin arcing higher and higher, providing an angelic demeanor. The coda contains a series of deceptive harmonic moves succeeded by a widely spaced cadence and breathtaking altissimo E-flat from the violin.

The final movement opens vigorously with a bravura melody exchanged between the two instruments. A gentle segue is followed by juxtapositions of C-minor dance passages and a burnished tune in A-flat that deftly deploys the violin’s g-string. The sense of syncopation of the pulse in the piano energizes much of the movement. Once again, with tremolando piano and the theme hit back and forth, the piece returns to C-minor. A harmonic sequence populated with dance rhythms brings the proceedings through a series of modulations and then quickly articulated modulations, each of which underscores a bit of the preceding material. A-flat puts up quite a fight for supremacy, and the piece remains in major, but concludes elsewhere. The second theme returns, ascending to the soprano register to arrive at a strong cadence. One may think things are concluding, but this material in turn is pushed away by a coda that ends in C-major, providing a triumphant conclusion. The Piano Concerto is Grieg’s most well-known piece. In terms of construction and memorable melodies, the Sonata might well be its equal. In the hands of Duo Gazzana, it turns to gold.