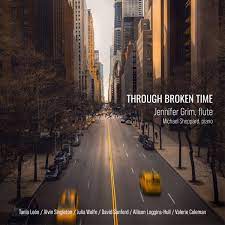 In Anthony Barrone’s astute liner notes, he describes Through Broken Time, flutist Jennifer Grim’s New Focus recording as a mixture of pieces that explore Afro-modernism and post minimalism. I would suggest that classic modernism also plays a role in these varied and compelling pieces for solo flute, overdubbed flutes, and flute with piano accompaniment.

Case in point is Tania León’s Alma. Her propensity for Mediterranean rhythms and melodies is on display, but in places it is subsumed by post-tonal gestures and irregular rhythms. Balancing the piece’s digressive narrative, Grim and pianist Michael Sheppard demonstrate a simpatico pairing. The earliest piece on the recording is Alvin Singleton’s Argoru III (1971); the rest have been written in the past fifteen years. Gestural angularity, trills, microtones, bends and florid lines, with suddenly appearing altissimo pitches, make this challenging both from a technical and interpretive standpoint. Grim does an admirable job shaping the piece to create a sensitive performance. Would love to hear more first-rank players tackle this piece.

Julia Wolfe’s Oxygen: For 12 Flutes (2021) is a brand-new piece for overdubbed instruments. At fifteen and a half minutes, it is the longest piece on the recording. Even with overdubs, one senses the exquisite breath control required in each part. Whorls of ostinatos are offset by melodies in quarter note triplets. The central section thins down to just the slow melody and then resumes in a buoyant dance with mouth percussion. Gradually, the slow melody does battle with rocketing upward gestures and trills. A new ostinato goes from bottom to top, once again juxtaposing the low melody and trills as a cadence point. Thinning out the texture to the slow melody and a number of polyphonic lines and soprano register flurries, the last few sections then build several of the previous segments into new combinations. The slow melody is presented in the bass register, accompanied by it in halved values in the treble in an oasis before the finale, a pileup of material that displays all twelve flutes, punctuating the close with a bevy of trills.

David Sanford’s Klatka Still (2009) is a two-movement piece, dedicated to trumpeter Tony Klatka. The first combines a solemn chorale-like passage in the piano with disjunct gestures in the flute. The duo finish the movement returning to the note A-flat again and again, almost obsessively. The second movement gives the piano a shuffle rhythm. After a cadenza, that flute takes up a moto perpetuo with a bit of swing alongside the piano. Then another cadenza with interpolations by the piano. Gradually the duet evolves into descending third gestures in the piano which spurs still another ostinato in the flute. The duo adopt and then discard a number of tempos, each developing one of the segments of the material presented at the movement’s beginning. Finally, the first ostinato locks in, with the flute adorning it with high trills, leading to an abrupt close.

Allison Loggins-Hull’s Homeland (2017) has the benefit of the composer being an accomplished flutist as well. It is expertly composed for the instrument, giving Grim a score to relish: which she does. Like so many of Loggins-Hull’s pieces, it meditates on race, grief, and impoverishment. Homeland’s subtext considers the mournful experience of being deprived a home, from those stolen for the slave trade to the survivors of Hurricane Katrina. The piece is a compelling testament to mourning, with a soulful yet undefeated character.

Valerie Coleman’s Wish Sonatine (2015) is inspired by Fred D’Aguiar’s eponymous poem about the Middle Passage of the Atlantic Slave Trade. Coleman depicts both the creaking of the slave ship’s hull and djembe rhythms from the homelands of the enslaved. Score markings suggest the struggles she depicts: “Defiant,” “Chaotic, gradually more anxious,” and “With fierce indomitability to survive.” Emotive and programmatic, Wish Sonatine vividly communicates the type of engagement she seeks.

The piece closes with a new work by David Sanford, commissioned by Grim, Offertory I and II (2021). The first movement knits together spare melodies, often doubling flute and piano. Muted repetitions in the piano and supply lyricism in the flute bring the movement to a close. The second begins with a solo cadenza that is fleet, combining post-bop and post-tonality. The piano chimes in with tense intervals and succinct gestures, the two combine into a Calder mobile of busy overlaps and alternating gestures. The piano gets its own solo turn, the two eventually coming together on unison rhythms but disparate gestures – spaced chords from the piano, and trills from the flute. The piano takes on a muscular strut while the piano adopts another jazz-tinged solo. Descending whole tone patterns followed by a terse game of hide and seek ends the piece, and the recording, with a button. A well-curated and admirably well-performed collection, Grim’s Through Broken Time shares a bevy of repertoire that should be in any new music flutist’s folder.