[Ed. — After many years in NYC but fresh to my own stomping ground of Houston, Chris Becker has offered to write some semi-regular musings on the new-music scene down thisaway. His own introduction:

In its March 2010 Global Ear column, The Wire magazine described Houston as “the weirdest and wildest of (Texas) cities” with a “rich tradition of unofficial and DIY art.” Speaking as a recent transplant from New York City (where I lived for twelve years), I can confirm that our British friends were on point with their analysis of H-Town. I am in my third month as a native, and only just beginning to take in the breadth and variety of Houston’s cultural scene– especially its music. Although I’m also enjoying the city’s classical music (Houston Grand Opera, Mercury Baroque) each dispatch I bring to you from Houston will focus on contemporary composition, improvised idioms, and works that integrate theatre, the visual arts, and/or dance. Inevitably, my love for rock, folk, blues, country, zydeco, and all out noise (Red Krayola, anyone?) will creep into future writing, the overall goal being to expand peoples’ perception (including my own) of where one can find innovative forward-thinking music.]

2009-2010 marks the sixth year that Houston’s contemporary ensemble and presenting organization Musiqa has presented its “loft” concert series at the Contemporary Arts Museum of Houston. Each concert program is produced in conjunction with and inspired by a different exhibition. In May, CAMH debuted the show Hand + Made featuring works that blur the lines between craft (crochet, pottery, glass blowing) and performance. As a composer who has collaborated with clay and crochet artists (often in combination with dancers and improvising musicians), I dug the curatorial concept immediately and looked forward to hearing what pieces the composer founded and led Musiqa would choose for Hand + Made’s corresponding May 20th concert.

The concert took place at CAMH with the musicians surrounded by the artwork on display – including several elaborately designed and decorated “sound suits” by artist Nick Cave (a former dancer with Alvin Ailey’s troupe, not the singer with the Bad Seeds). I was happy to see people of all ages and filled CAMH’s space for this concert, using up all of the available benches and much of the floor space.

The program – performed by three percussionists (Craig Hauschildt, Alec Warren, and Blake Wilkins) included Clapping Music by Steve Reich, Panneaux en acier by Marcus Maroney (a beautiful and relatively new work for percussion soloist on various metals), Vinko Globokar’s primal piece of solo performance art Corporal (bravely and convincingly realized by a half naked Craig Hauschildt who was required to – among other actions – slap and strike parts of his body), and Ohko for three djembes by Iannis Xenakis. The performances were incredible, blurring the lines between what was composed, what was improvised, and where “music” as one might define it begins and ends. Musiqua’s program illuminated the creative interzone that is “in-between categories” where many of Hand + Made’s artists (and many Houstonians) reside. 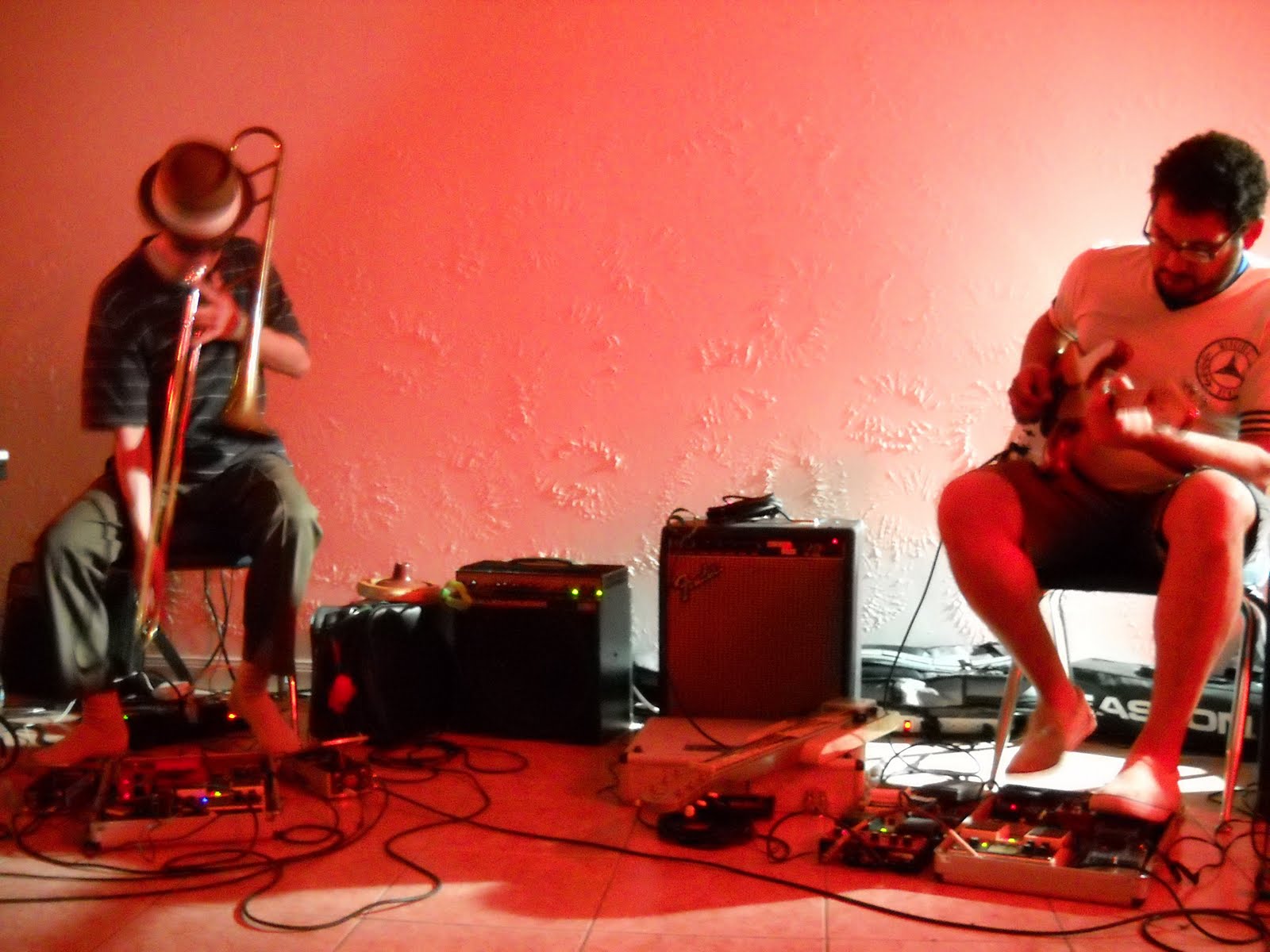 Artist and performer Yet Torres is responsible for the handmade design and packaging of the new double CD Screwed Anthologies: improvised music under the influence of DJ Screw featuring David Dove (trombone) and Lucas Gorham (guitar, lap steel). David and Lucas celebrated this CD release Sunday May 30th at Resonant Interval – a concert series (“Sideways Shows For A Straight Laced City”) that features Houston’s experimental, electronic and improvising artists. David is the director of Nameless Sound, a presenting organization that, in addition to bringing experimental musicians from around the world to Houston, offers music instruction to young people in the public schools, community centers, and homeless shelters. Screwed Anthologies is a “disjointed exhibition” initially conceived at Labotanica (an experimental laboratory for art and performance located in the historic Third Ward) featuring music and mixed media performances inspired by the “screwed and chopped” music of the formidable DJ Screw. The venue for the Resonant Interval performance was an empty storefront located a few doors away from a cool wine and beer bar with its own show on its walls of lovely and haunting photographs of New Orleans. Once again, the space was filled with people ready to take in the music.

Throughout David and Lucas’ set, excerpts of DJ Screw’s music were cued and superimposed over the sometimes (but not always) heavily processed sound of David’s trombone and Lucas’ lap steel and guitar. “Under the influence…” is the tag to this project, but legacy or homage did not seem to drive the actual improvising in performance (although both David and Lucas created sounds that harkened to the slow tempos, shifted pitches and soulful timbres of DJ Screw’s mixes). The disparate qualities of each sound (including the stray transmissions of DJ Screw) hung in the air like parts of a mobile (or a collection of Duchamp ready-mades) creating an experience where one seemed to hear each component to the music as an individual entity sitting in its own time and space, even as the music unfolded in the context of a duo (trio?) improvisation. The influence of Houston-born Pauline Oliveros was apparent, along with the sounds of Houston’s birds, traffic, and weather. I am excited to hear (via bootlegging or perhaps another CD-R or two…) how this music develops on the road. David and Lucas are currently touring Screwed Anthologies throughout the South and East Coast. You can get the tour dates here.