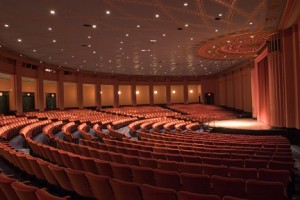 Tomorrow and Thursday are two special nights for contemporary music in Ann Arbor, Michigan. This week, the University Musical Society is celebrating the 50th Anniversary of the ONCE composers, a group of University of Michigan student composers whose 1960s new music festivals gained worldwide acclaim. The surviving members of the group, which was founded by Roger Reynolds, Robert Ashley, Donald Scavarda, Gordon Mumma, and the late George Cacioppo, have come back to Ann Arbor to revisit the revolutionary spirit that inspired them and recognize what they’ve achieved in the years since they left Michigan.

The local media here in southeast Michigan have previewed this week’s event with great success, so head the to following links if you’d like to read what annarbor.com, the metrotimes and the Detroit Free Press have to say about the history of the ONCE group. I will be Sequenza 21’s eyes and ears observing the rehearsals and other behind-the-scenes activities that will make these concerts happen. Additionally, I will review both performances and talk to each of the composers at Wednesday’s “Conversation with the ONCE Composers”.

For now, I have the pleasure of watching the ONCE composers in rehearsal, which is a beautiful experience. First of all, they are clearly thrilled to be in Ann Arbor; this is clear in their smiles, the enthusiasm with which they interact with their performers and, most poignantly, in the playful anecdotes the ONCE members have shared with each other between rehearsal times. Robert Ashley and Gordon Mumma have been warm and enthusiastic to their performers, the former even joked with Dr. John Ellis – chair of piano performance at Michigan – earlier today, quipping, “that last phrase is one I never got right,” in reference to his solo piano piece Large Size Mograph.

Roger Reynolds’ professionalism is admirable: he understands how to get exactly what he wants from his players without being curt or overbearing. Thursday night’s concert, which features recently written works by the ONCE composers, includes Reynolds’ Ariadne’s Thread for string quartet and electronics. He has handled the quartet masterfully so far, explaining to them the vision he had beyond his complex musical language and guiding them with generalities towards the affect he desires.

If you are in the Ann Arbor area tomorrow or Thursday at 8 PM, head to Rackham Auditorium on the University of Michigan’s Central Campus to share in the past and present of this important movement in American music (tickets are also $2!). If not, stay tuned to Sequenza 21 for updates on this event all week long. The programs for the concerts and a description of the rest of the ONCE MORE festival is available here.