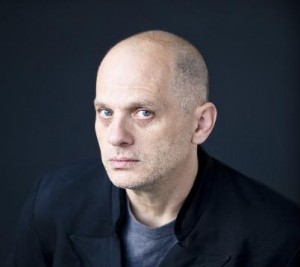 On Sunday, February 19, Pulitzer Prize-winning composer David Lang brought his music to Samuelson Chapel for the 10th Annual New Music Concert at California Lutheran University. The concert was well-attended and performed by the students, faculty and friends of the CLU music department. David Lang participated in a Q&A session with department chairman Wyant Morton and offered a number of observations on his life as a composer and how it had changed – mostly for the better – by winning the Pulitzer. His easy conversational style and helpful remarks about his music connected well with the audience.

The concert opened with two solo piano offerings from Memory Pieces – a group of 8 small-scale works that were written to capture specific memories of friends who had passed away between 1992 and 1997. These were ably played by Jessica Helms, former CLU student and accompanist for the vocal ensembles for the concert. The first piece, wed, was written in memory of Kate Ericson who, though mortally ill and near death, married her long-time companion and artistic collaborator. The music for this consisted of a series of even phrases that alternated between an airy optimism and sudden dissonances – as if reflecting the hope present in marriage and the pull of mortality. Tellingly, the piece simply stops.

The second piece, grind, was written in memory of Jacob Druckman, David Lang’s teacher at Yale. In the pre-concert Q&A David admitted to having a somewhat bumpy relationship with his mentor and this piece accordingly features loud and aggressive sounds in the lower registers.  The repetitive phrasing suggests a series of running disagreements and yet there was a kind of creative tension present in the music, doubtless a byproduct of that relationship. The title was well-chosen.

An a cappella vocal piece titled I Lie was performed next by the women of the Areté Vocal Ensemble, directed by Morton Wyant.  This was originally commissioned by Kitka, an all-female vocal ensemble in the Bay area specializing in Eastern European folk music. I Lie is a Yiddish love song of expectation and waiting and the music portrays this through a series of soft, short phrases joined by longer, over-arching tones. A soprano solo, nicely sung by Debbie Schaeffer, provided a complimentary external melody. The harmony was, by turns, airy and light as well as somewhat dissonant, but always delicate and concise.

lend/lease is a piece scored for the improbable combination of piccolo and wood blocks and was performed by Nancy Marfisi playing piccolo and percussionist Scott Higgins. There is an exotic, almost Asian feel to this and the interconnection of the parts was such that the musicians wisely faced each other for needed visual communication. lend/lease was written for a recent birthday celebration of the London Sinfonietta and reflects the cooperation between the United States and Great Britain in the early years of World War II. The intricate rhythms and patterns of lend/lease were carefully executed and the efforts of the players were recognized by the applause that followed.

Oh Graveyard from 2010, was performed by the full Areté Vocal Ensemble – some 24 voices strong. This piece is nominally based on the spiritual Lay This Body Down but is “more a response to the genre of spirituals and what they mean”, according to the composer.  Oh Graveyard begins with small phrases and builds up voice by voice.  A series of solos – soprano, tenor, bass and alto – break off from the main body of singers and add to the layers of smooth harmony that convincingly evoked the peace and restfulness of the title.

the anvil chorus for solo percussion was written, according to the composer, to celebrate “… – that since the beginning of time people have always banged on things as a result of their profession.”  The piece begins with a steady, recognizably musical rhythm but one punctuated with a series of loud bangs, clangs and booms at unexpected intervals. The percussive elements were well chosen to recreate familiar metal-working sounds and this added to the industrial atmosphere, especially in the slower tempos. As the pace of the piece quickened, a more cohesive sound emerged that made a convincing connection between the shop floor and musical expression. According to the program notes the anvil chorus “..uses a ‘melody’ to control various beat patterns. The ‘melody’ is played on resonant junk metals of the percussionist’s choosing, and, by adding certain rules, it triggers an odd accompaniment of non-resonant junk metals, played both by hand and by foot.”  The fine effort by Scott Higgins in his performance of this piece resulted in sustained applause and scattered shouts of enthusiasm from the audience.

again, the final piece of the concert featured the Cal Lutheran Choir, directed by Morton Wyant.  This work from 2005, is a setting of a few lines from the book of Ecclesiastes. again begins with short phrases in the bass and tenor with longer phrases arcing above in the higher voices. This results a well-developed harmony that was most effective when all the parts were singing together – the 70 voices of the choir were sufficient to fill the space even though dispersed, having fanned out around the edges to surround the audience.  The soft, delicate nuances of this piece provided a quietly beautiful ending to a concert of new music that was both accessible and well-received by those in attendance.