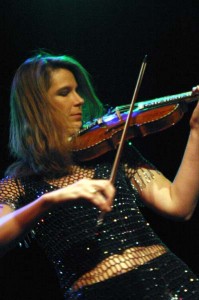 Superstorm Sandy wreaked a fair amount of havoc on a lot of concert schedules, but things are starting to return to something resembling normal. One quick shout-out I’d like to pass along is a performance this coming Sunday, Nov. 11, by the really wonderful violinist/violist Karen Bentley Pollick.

Usually found at home in the mountains of Colorado, Karen’s coming to Brooklyn to give a concert of lots of pretty recent music — including the premiere of former Brooklynite and S21 composer/webmaster Jeff Harrington’s Grand Tango for violin with video. Jeff’s been living in France for a couple years now, and it’s good to see his work find its way back here.

It’s an afternoon concert, 3:00 pm at the Firehouse Space (246 Frost Street in Brooklyn, New York). Tickets are only $10 at the door — so if you need a break from all that’s been happening, and wouldn’t mind hearing a concert filled with fantastic playing and tons of music you’ve likely never heard before, head on over.

And for my Seattle friends, Karen will be doing the concert Nov. 16 at the Chapel of Good Shepherd Center, and then Dec. 14-15 in San Francisco at Theater Artaud Z Space.