Fellowship of the Strings 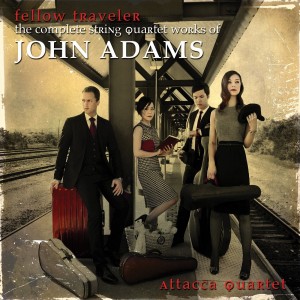 Since no one listens to contemporary classical music, and it doesn’t get put on concert programs, to have a new work not only recorded but recorded again, by different musicians, is an impossible dream. But that’s what happens when you’re John Adams, America’s leading composer. And deservedly so, because he’s a deeply skilled and intelligent composer with serious things to say and the aesthetic to say them clearly, expressively and winningly without pandering to or patronizing his audience.

But he is a busy man, and some of his recent work, like Absolute Jest and The Gospel According to the Other Mary seems more assembled from parts of pieces he (or, in the case of the former, Beethoven) has already made than thought through and composed. That’s been particulary frustrating, since his String Quartet, which I saw premiered in 2009, is not only a terrific piece but one that seemed to have opened the door to a new, late style.

The St. Lawrence Quartet was the original dedicatee, the ensemble that played it in public and recorded it first. Their intense, nervous energy was exactly right for the sinewy, restless music. Now they’ve been followed by the Attacca Quartet, with a Fellow Traveller, a new CD of Adam’s complete works for String Quartet. Their manner with the piece is very different, and that’s a strength of the recording that also serves the quality of the composition.

What is most interesting about the String Quartet is how Adams, who is fundamentally a Neo-Romantic composer with a great facility for tension, release and powerful expression, uses repetition to create a sensation of agitation, but this time without much resolution. At the Attacca’s enjoyable CD release performance at (le) poisson rouge, Adams spoke about harmony and how he believes that a facility for it is necessary for composers. But the Quartet is one of his least harmonically rich pieces, it subtly reaches back to Minimalist experiments like “Christian Zeal and Activity.” It’s also more closely related to Beethoven, who was of course a magnificent harmonist but whose secret power was always rhythm, especially building and releasing tension by moving the downbeat around to different parts of measures while maintaining the same meter.

That’s what Adams does in the Quartet, plays around with the rhythmic possibilities of short phrases, different lengths, different pulses. There’s a lot of chattering interplay that add to the overall dynamism and the whole builds to an evocative and enigmatic payoff. The Attacca plays this with less muscular vigor than the Borromeo but with more thoughtfulness, more introversion, and so bring out the internal mysteries of the music, and the swing a little bit more. They also are a more lyrical ensemble, and they pay more attention to phrasing than attack and articulation, and the results are not only expressive but place the music directly in the long history of Western classical music. I can hear the Haydn and Beethoven that is part of their memories.

That approach also pays off in John’s Book of Alleged Dances, which is both amusing in intent and seriously well-made. This is extroverted music, and the Attacca plays it that way, which adds to the impression that larger piece gives. Dances is not first-rate Adams, but especially in person, the Attacca give it a first-rate performance.