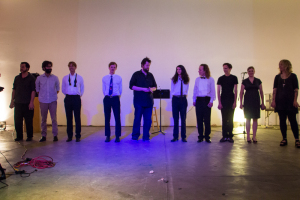 On Tuesday, September 9, 2014 the Southland Ensemble presented a concert of the music of Pauline Oliveros at Human Resources in the arts-friendly Chinatown district of downtown Los Angeles. The performance space, with its wide open floor and lively acoustics was the perfect place given that the works of Ms. Oliveros typically include a theatrical component. The seating, arranged logically around the perimeter, was completely filled by those attending.

The concert opened with Sonic Rorschach (1971) and for this groups of electric fans were arrayed in the corners to provide white noise, as called for in the composers notes for this piece. A member of the Southland Ensemble was also stationed in each corner to model a contemplative pose for the audience as they filed in. After a dozen or so minutes, when all were seated and quiet, the ensemble rose together, each holding a percussive whip – two wooden slats joined by a hinge. At a signal, all the whips sounded simultaneously with a single loud crack that reflected nicely off the cement walls. The single sonic pulse from the whips was delivered with remarkable precision, given that the players were several dozen feet apart. The performers then resumed their seats as the piece concluded, immersed in the meditative white noise of the fans. Sonic Rorschach is scored for a duration of 30 minutes – and this performance was probably close to that – the time spent in meditation was a useful prelude to the rest of the concert. 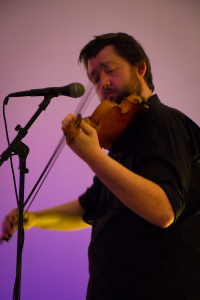 Thirteen Changes (1986) followed, performed by Eric KM Clark on violin. For this piece there was recorded narration of thirteen phrases such as “Standing naked in the moonlight – Music washing the body.”, “Rollicking monkeys landing on Mars”, “A singing bowl of steaming soup”, etc, and these preceded a short impression of the text by the violin. This was also accompanied by recorded samples and audio effects – skittering and swirling, or at times a wash – and various other recorded sounds. Eric KM Clark created all of this and his voice read the text. In one sequence there were the sounds of a forest coming from the speakers, and the violin answered with a sort of mooing, matching the organic character of that segment. A distinct sentimentality is brought into the recorded mix by the violin. This seems characteristic of Ms. Oliveros work – which seems to exist at the conjunction of human emotion and ambient sound. The playing by Eric Clark was controlled and precise and nicely complimented the evocative recordings.

Bye Bye Butterfly (1985) was next, and this was the playing of an entirely recorded piece as improvised by Ms. Oliveros. This is a dual-channel tape composition incorporating two Hewlett Packard oscillators, two line amplifiers, a turn table and two tape recorders in a delay configuration. The composition was created in real time and begins with a high, pure tone that is alternately steady and varying in pitch, reminiscent of an old radio tuning in a far-away station. This had a mysterious, alien feel, but soon a chorus of female voices was heard, mixing with the tone to create a kind of rough harmony. Ms. Oliveros has written that this piece represents “..not only a farewell to the 19th century but also to the system of polite morality of that age and its attendant institutionalized oppression of the female sex.”

Notwithstanding the feminist dimension to this piece, the combination of pure sine tones and vocals mixing smoothly together created a new and interesting context: when the vocals diminish, and the oscillator is suddenly heard alone – the listener invests an empathetic quality to it, and the alien coldness of the first hearing falls away. This mixing of overtly human and purely electronic dissolves the dividing line between the two, and the listener becomes aware of entirely new possibilities. It is this ability to conjure a completely new point of view that doubtless makes Bye Bye Butterfly one of the more popular Oliveros compositions.

Next came Song for Margrit as performed by Jon Stehney. This piece comes off more as theater than music, and begins with Stehney standing in the center of the space, arms held slightly outward with upturned palms. There is a cough, some sniffling – the word “I” is loudly spoken – and Stehney walks towards the audience. All of this is distinctly human activity but the odd movements evoke a more remote, mechanical presence. There is more walking along the edges of the crowd, with Stehney sitting for a few moments in the seats. He then rises and returns to the center of the space, shuffles, and then, unexpectedly, emits a musical hum – and this decisively changes the context. The performer becomes fully human in that instant and the remote feel of the previous actions are completely displaced by that short burst of music. Stehney exits, and the observer is left to ponder the nature of the reality just witnessed. In Song for Margrit, as with Bye Bye Butterfly, Pauline Oliveros artfully confronts us with material that contains alternate points of view. 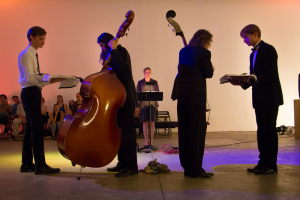 Another theatrical piece followed, the playful Double Basses at Twenty Paces (1968). With all the mock solemnity due such an occasion, a tuxedo clad second walks to the middle of the performance space and sets up a music stand. Another second appears and meets the first in the center again, this time with stools, and they pace off in opposite directions. A conductor, played by Cassia Streb, and takes her position in the center. The two principles arrive – James Klopfleisch and Jacob Rosenzweig – carrying their basses. They are presented bows by the conductor with great ceremony and then, starting back-to-back, the two players pace off to their respective positions. The seconds, Orin Hildestad and Alex Wand, now attend each bass player and with a short ‘Allez’ from conductor Streb, the duel begins. 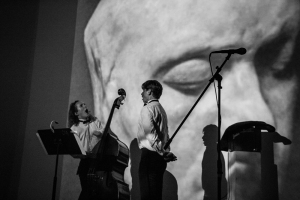 The ‘duel’ consisted, variously, playing in different styles and registers, of spoken explanations of bow types and other parts of the instrument, descriptions of the origin and manufacture of each bass and other such topics. Typically one player spoke while the other was playing, and it was all very light and entertaining. Eventually both bass players began to play in a soft, low strumming that gradually gained in power. The house lights were switched off and a large image of Beethoven’s death mask was projected on the wall as the last movement of his Fifth Symphony was heard through the speakers. This blended nicely with the sounds coming from the basses, but eventually the players added their voices to the mix with a series of howls and yelps. This seemed at first to be a strange combination but as the energy level from Klopfleish, Rosenzweig and the seconds increased, it took on a sort of organic unity with the recording. The controlled intensity of the Beethoven and the expressive vocals of the players melded together and the while listener could choose between formal classicism or primal scream – the message in the music was essentially the same. The overall effect was to create a gratifying connection between the old and the new; the long dead Beethoven and the immediacy of the live performance.

The concert concluded with Rock Piece (1979) and for this each member of the Southland Ensemble picked up a pair of rocks from a pile stacked in the center of the performance space. The composer’s notes state: “Each participant chooses a pair of resonant rocks to use a percussive instruments. After listening for environmental pulses each participant establishes an independent pulse with the rocks. The pulse is to be maintained steadily without any rhythmic interpretation or accents. While listening to the overall sound, if the participant perceives he/she is synchronizing exactly, or in a simple multiple or division by 2 or 3 of another participant’s pulse, s/he stops in order to listen and begin a new pulse that is independent in rate from all other pulses.”

The players started in a circle at the center of the space and moved outward from there, filling the Human Resources building with the clicking and clattering of rock striking rock. Listening to all this, the hearer often imposes a perceived rhythm for short stretches – even where none is intentionally created. At the same time one also hears the more organic and natural sound of rocks being struck randomly, like a rocky beach in a high surf. The perception of the listener oscillates back and forth between random, organic sounds and the self-imposed, seemingly intentional rhythms. Thus two realities exist that depend entirely on the context that the listener chooses to provide. Rock Piece is an engaging and surprisingly intricate piece that produces a sophisticated listening experience from the simplest of materials.

The Southland Ensemble has become a reliable resource for new music in the Los Angeles area, staging concerts of works by Christian Wolff and Alvin Lucifer in the past year. Their next concert will be December 19, 2014 featuring the music of James Tenney.

Special guests for this performance were Alex Wand and Jacob Rosenzweig.