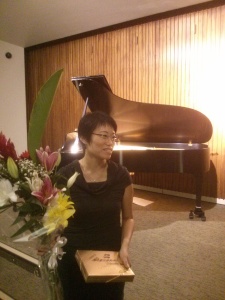 The Brand Library in Glendale was the site for an evening of piano music by Steve Moshier on Saturday, October 25. Cynthia Law performed three Moshier pieces, including the premiere of Into the Safety of the Abyss (2014).

The concert opened with Unchained Melody: Eight Bagatelles for Piano (1999) and the first of these began with a series of strong, decisive chords that invoked an important, stately feel The opening passages were repeated in the higher registers, slightly subdued, before returning to the powerful lower chords. The second bagatelle was softer but along the same lines, as if a development on the opening theme. It featured a bit more complexity as well as counterpoint that produced a sense of rolling motion.

Other movements of the Eight Bagatelles for Piano were variously fast and running or featured melody and counterpoint that smoothly changed between the left and right hands. The forth bagatelle, Andante non troppo e grazioso, was perhaps the most characteristically Moshier – starting out slowly but with an exotic feel, turning more introspective with a question and answer dialogue in the passages. The contrast in dynamics in this section were nicely accented by Ms. Law and there were a number of sections that featured well-played counterpoint.

Bagatelle 7 featured a series of light arpeggios that gave a feeling of uplift with a counter melody that contained an elegant, distinguished polish reminiscent of a Beethoven sonata. The final bagatelle started as a fast, irregular series of notes – like code carrying some message. This was accompanied by a series of bright chords that gradually turned warm, followed by some nice syncopation in the right hand. The piece finished strongly in the deep lower registers , recalling the declarative feeling of the opening movement.

The music of Steve Moshier is most closely connected with the Liquid Skin Ensemble and this piano music was recognizably similar, with its precisely regular rhythms and crisp minimalistic repetition. Ms. Law provided an accurate, even reading – exactly what this music requires. The piano filled the recital hall with a big sound that was especially effective in the lower registers.

The second piece of the concert, Shadows from the Underworld (1997), began with deep, mysterious chords that produced a feeling of movement – like traveling into an unknown territory. A small, repeating figure in the upper register with a counter melody in the middle added to the atmosphere, but this was followed by a more playful feel as the notes ran ahead. The piece oscillated back and forth between the lighter, bouncy sound and a stronger, more exotic feel that inspired a certain awe – like looking at a volcano or remote temple.

The darkness and light theme continued, the lighter dominating with a series of freely repeating figures that gave way to a more conventional feel that included a some nice harmonies and a good bass line. The contrast gradually increased, now darker and louder in the lower registers, but offset by higher and brighter passages. This was precisely played by Ms. Law and featured some artfully smooth and expressive runs in the right hand. The piece concluded on a series of strong but optimistic phrases at its sudden ending. Despite the ominous title, Shadows from the Underworld felt more like the hopeful light than darkness or sadness from below. 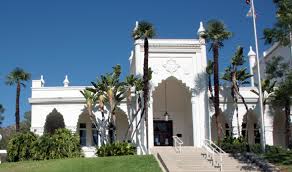 After a short intermission the premiere performance of Into the Safety of the Abyss (2014) began softly with a hesitant melody in the higher registers, filled out in the middle and when fully developed had a full and almost bouncy feel. The counterpoint and rhythms were familiar but in this newest Moshier piece the texture seemed a bit more dense and meaty than in the earlier works. Into the Safety of the Abyss consists of three movements and in this first there was an almost classic feel as the introductory passages were expanded into a series of development sections. A dialogue that developed between the right and left hands provided an interesting exploration of each theme.

The second movement started with a single line of notes and a lower counter melody and this was repeated and inverted, with the lower register taking the melody. A series of sharp statements – accentuated by rests – appeared, and this was followed by further development. The harmonies here were more fully formed and there seemed to be a willingness in the writing to follow the music wherever it might lead – yet at the same time showing a greater strength of structure.

The final movement began with a series of sharp, dance-like chords that developed with complex counterpoint into a series of interesting passages. There was a return to the opening bars of this movement and further development in different registers. This gave some scope for interpretation by Ms. Law, whose strong playing and careful articulation was up to the greater complexity of this piece. After a powerful restatement of the opening theme Into the Safety of the Abyss concluded. This was perhaps the most structured and fully formulated work to date from Steve Moshier and provides strong evidence of a style that continues to evolve.

The playing of Cynthia Law was ideally suited to Moshier’s minimalist style – accurate, precise and always under control. After an evening of carefully performing so many notes her efforts were received by sustained applause from the audience.