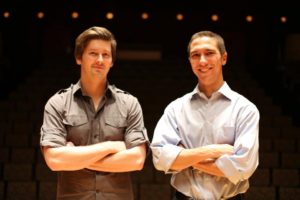 Panic Duo, consisting of violinist Pasha Tseitlin and pianist Nic Gerpe were featured in a People Inside Electronics concert on December 10, 2016 at Throop Unitarian Universalist Church in Pasadena. The event was held in the roomy church auditorium and a full size crowd braved the weekend holiday traffic to hear seven contemporary pieces, including a world premiere. With one exception, all the pieces were by Los Angeles area composers and five were in attendance.

The first piece was The Alchemy of Everyday Things by Jason Francesco Heath, inspired by the Villa Aurora, the cultural center and artists’ residence in Pacific Palisades. This opens with lush tones from the electronics accompanied by sustained violin notes above. In a most unusual form of piano preparation, a fishing line is drawn across the piano strings and amplified, filling the performance space with the most amazingly deep and resonant sounds. The combination of the electronics, violin and piano string produce some lovely harmonies and a warm, soothing texture. There is no perceptible pulse and the piece floats dreamily along with a feeling of nostalgic introspection. About midway through, the piano is played from the keyboard and the violin becomes more restlessly active. This purposeful feel soon gives way to the slower pace of the opening while the sound of surf, wind and quiet whispering is heard from the electronics. The line is drawn once again across the piano string, restoring the mystical ambiance at the close. The Alchemy of Everyday Things is an extraordinary piece that perfectly captures the sense history present in the Villa Aurora.

Who Cares If You Listen, by John Frantzen followed, and the title was based on the famous 1958 High Fidelity magazine article written by Milton Babbitt. In his remarks prior to the performance of this piece, Frantzen explained that he was inspired by the sounds of some of the famous quotes about music, starting with Babbitt and including sayings by Busconi and Ives. Solemn electronic sounds begin the piece, soon joined by the solo violin. The pounding of construction equipment was heard through the speakers and trills in the violin introduce an element of anxiety. Faster violin runs give way to repeating passages having the same rhythm and cadence as the speaking of the phrase “Who cares if you listen.” This was reminiscent of the vocal patterns heard in Steve Reich’s string quartet Different Trains, but in this case no recorded voices were heard. The Busconi quotation was less concise and illustrated with rapid violin phrases – precisely played by Pasha Tseitlin – along with a dance-like pizzicato section. The final quotation came from Charles Ives: “Why can’t you stand up before fine strong music like this and use your ears like a man?”, apparently in response to a heckler at a concert he was attending. This was accompanied by increasing volume in the electronics and a much faster tempo for the violin, resulting in a dramatic finish. Who Cares If You Listen is an artful blend of electronics, masterful violin playing and the sounds of speech patterns that combine to produce an intriguing extension of the sentiments expressed in the underlying quotations.

Mixed Messages, by Tom Flaherty was next and represents something of a personal challenge by the composer to invoke different emotions from limited materials, in this case a single chord and its various inversions. Mixed Messages begins with a deep, dramatic chord from the speakers, soon joined by the piano and violin in their upper registers. There is a mysterious feel to this, unfolding into a darkly expressive character, much like the music of the early 20th century. As the piece continues into the various chord inversions, the feeling becomes less menacing and more reflective. Later, an active and purposeful sensibility emerges as the tempo moves ahead. Towards the conclusion of the piece a loud drumming rhythm is heard – a tribute to a West African musical colleague – and the playing becomes very expressive out to the finish. Although bounded by the narrow span of its musical materials, Mixed Messages succeeds through a deft combination of electronic sounds, acoustic instruments and skillful construction.

Orizzonte, by Missy Mazzoli was next, and this was scored for electronics and solo piano. The title translates to ‘Horizon’ and accordingly this piece begins with pure, flat electronic tones and just a few piano chords. The feeling is distant and remote, like looking far out to sea from an isolated beach. Even as the piano phrasing builds in intensity – becoming more expressive – the electronics remain consistently flat, providing an effective emotional counterweight. The piano remains in the empathetic foreground as the electronic sounds continue with their quiet regularity in the background. Towards the end the piano playing becomes more restrained, but this only increases the sense of faraway solitude. Finally the piano ceases and the steady electronics fade to a quiet finish. Orizzonte is an effective characterization that nicely combines an emotional piano line with the abstract electronics, allowing each to compliment the other.

Fissure, by Anne LeBaron followed.  This was the world premiere, commissioned for this concert and inspired by the Edgar Allen Poe story  Fall of the House of Usher. Ms. LeBaron had spent some time in an upstate New York mansion – supposedly haunted – and came back with some field recordings that were incorporated into Fissure. The title of the piece comes from the large structural crevice that develops in The Fall of the House of Usher that metaphorically increases in size as the protagonist lies dying inside the mansion. Fissure included a theatrical component – the stage was empty at the start, but the silence was broken by the screaming of Nic Gerpe as he staggers in and sits at the piano. The speakers issued the sounds of low bells jangling ominously as Pasha Tseitlin enters, his violin softly meowing like a cat. A series of loud, chaotic sounds were heard – piano crashes and rumbling from the electronics – adding to the sense of acute psychological drama. The tension continued to build as the piece moved forward, quiet stretches alternating with the fury of deep emotional anguish. A sense of suffering and anxiety continued throughout, combined with the expectation of immanent manifestations of new musical hysteria. The sense of drama and mystery persisted to the finish, with the violin again pacing restlessly about and playing softly, before exiting offstage as the piece concluded.

Fissure is a finely crafted, heavily atmospheric piece that operates effectively on several levels and vividly portrays the emotional drama present in the famous story by Edgar Allen Poe.

After an intermission, Trembling, a 1983 piece by Morton Subotnick, began the second part of the concert. This began with piano arpeggios and dreamy repeating violin notes before a sudden burst of energy poured out in rapid phrases from each instrument. The ‘ghost’ electronics seemed to be processing the live acoustic sounds, adding a shimmering feel that served to increase the sense of tension and anxiety. As the piece progressed, stereo effects in the electronics were added so that various sounds were heard to be coming from side to side in the speakers. The sharp crack of an arcade game blast seemed to cross the room and this worked to widen the spatial perception in the audience, creating a wider space for the trembling effects. At times the piece became quiet, a faint bowing in the violin produced an eerie feel as the piano played short phrases. Towards the end there was a nicely played piano solo that was electronically processed and a woman’s voice was heard repeating a short phrase that added to the sense of mystery. Trembling is technically sophisticated given its vintage, and manages to maintain its relevance in an era of more powerful electronic processing.

The final piece of the evening was Pheromone B, by Isaac Schankler. Originally written for flute and piano it was subsequently revised for violin. Pheromones are the chemical trail that ants leave behind as markers, allowing long columns of swarming ants to form up over long distances. Pheromone B opens with two notes repeating in the violin and piano followed by a strong rumble from the lower piano registers. In this piece the acoustic sounds are reprocessed and sent back through the two stage speakers and this multiplying effect adds a kind of grandeur to the overall texture. At one point there is a nice tumble of rhythms that produced an almost organic quality, like a fast running stream or brook. The electronics appeared to be looping some of the phrases, adding to the volume and nicely replicating the process of building up a pheromone trail – the more ants that follow the trail, the stronger the pheromone signal. There were softer stretches that provided a good dynamic contrast to the louder roaring that usually followed. An elegantly light violin solo appeared to hover in the air as the piano weaved a line in and out, but this didn’t last. At the finish there was a buildup in density and volume, the electronics pyramiding the acoustic sounds so that it seemed as if there were six or eight players on stage, not just Gerpe and Tseitlin. Pheromone B is a carefully balanced combination of acoustics and electronic processing that forges the overall sound into a single, unified expression.

Panic Duo provided a full evening of contemporary music with a wide variety of innovative elements and styles. The playing was precisely matched to each piece and to the accompanying electronics that, happily, behaved almost perfectly. The coordination and integration of the electronic elements with the acoustic was seamless – a credit to all involved in the production.

The next concert by People Inside Electronics will be February 25, 2017, at this same Throop Church, and will feature Brightwork newmusic.