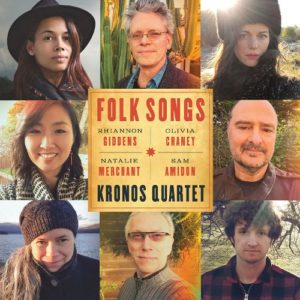 From its earliest recordings, which included transcriptions of jazz, Kronos Quartet has cast their net wide. The group’s repertoire encompasses music from the world over and from numerous composers in a variety of styles. To remind myself of Kronos’ earlier days, I put on their “Landmark Sessions” recordings of Thelonious Monk and Bill Evans. And what a reminder it was, pointing up the fluid nature of the quartet’s ability to shift tone and rhythmic feel to accommodate nearly whatever they approach.

On Folk Songs, their latest CD for Nonesuch, Kronos are joined by an all-star cast of vocalists – Sam Amidon, Olivia Chaney, Rhiannon Giddens, and Natalie Merchant – in a collection of American folksongs from various traditions.  The arrangements – skilfully wrought by Nico Muhly, Donnacha Dennehy, Jacob Garchik, and Gabriel Witcher – deploy the skills sets of the guests, including instrumental contributions, Amidon’s guitar and Chaney’s harmonium and percussion, to good effect. The aforementioned fluidity of the quartet affects the way that they serve as collaborators in the various selections. Amidon’s neo-folk adoption of Appalachia is well-served by fiddle tune melodies and straight tone chords. Merchant’s soulful voice is matched by chocolatey timbres and poignant phrasing. Frequent Kronos collaborator Dennehy’s contribution, an arrangement of the traditional Irish song “Ramblin’ Boy,” is an ideal vehicle for the supple singing and exuberant playing of Chaney. An arrangement by Garchik of Delta Blues vocalist Geeshie Wiley’s “Last Kind Words” is a suave and winning instrumental interlude. Giddens is a marvel, her beautiful singing winsomely swinging in two originals inspired by traditional blues: “Factory Girl” and “Lullaby.” While Kronos is currently busy with a multi-year commissioning project (titled “Fifty for the Future”), such thoughtful music-making in an entirely different vein is most welcome.