[untitled] is the moniker given by Seattle Symphony to its thrice-annual Friday night new music events. Staged in the lobby of Benaroya Hall, it’s a semi-formal atmosphere in which the Symphony can deploy its musicians in smaller groupings better suited to the exigencies of postmodern music. The first [untitled] concert of the new season took place on October 12, and featured the regional premiere of Hans Abrahamsen’s Schnee, offering listeners in the Pacific Northwest an opportunity to judge how well this work has earned the considerable attention it has received in its brief ten-year lifetime.

Scored for two piano quartets (one conventional, the other with woodwinds instead of strings) flanking a central percussionist, this hour-long piece is officially a chain of ten canons conceived in pairs. But don’t bother looking for Row, Row, Row Your Boat-style rounds. Abrahamsen’s vision of musical canons ranges from relatively straightforward imitation between two voices in stretto…

…to rhythm-only canons, to cases where the only trace of a traditional canon is the successive entries of similar lines:

It’s probably easiest to think of the canons as a set of ten segued movements in which each instrumental group stays within a tight-knit band of musical material. An important structural characteristic of the piece is that these canons get progressively shorter, starting with 8–9 minutes allotted to the distended Canons 1a and 1b, and ending with the fleeting Canons 5a and 5b, lasting a minute apiece (audio links and the YouTube embed above are from the work’s only commercial recording, by ensemble recherche).

Accompanying this process of diminution is a corresponding process of detuning where the string instruments, then the woodwinds, shift their intonation downwards by 1/6 and 1/3 tones so that they gradually go out of tune with the pianos. Mikhail Shmidt, violinist for the [untitled] performance, likens the effect to melting. Such a reliance on “dirty” intonational clashs—most prominent in Canons 5a/5b—reflects the influence of Abrahamsen’s teacher, Ligeti. In a particularly imaginative stroke, three Interludes are inserted as composed tuning breaks to allow the musicians to effect the retuning without a break: 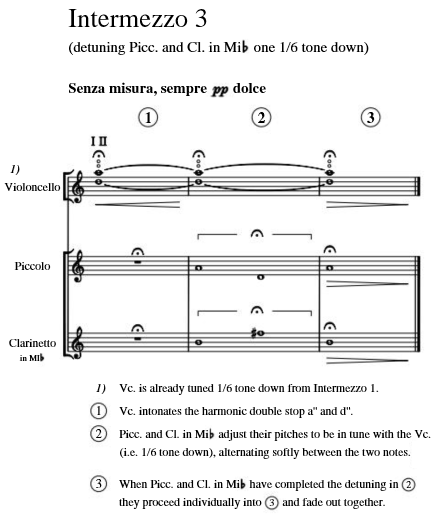 Ritual orchestral tuning is often satirized, and audiences will occasionally mistake tuning for an actual piece, but there is little precedent for written-out retuning occurring in the middle of a composition.

Schnee of course means snow in German (curiously favored by this Danish teutophile over his native sne), and this hour-long work is a suitably frosty and brittle affair. It begins and ends in the extreme treble register, and its overall sound world is dominated by white noise effects suggested by the title’s initial consonant. The score calls for scratchy bow noises, the application of Blu Tack to muffle piano strings, and frequent “half-breath” effects on the woodwind instruments (which in the case of the contralto flute and bass clarinet seem to have been specifically chosen for their breathy quality). The percussionist’s job mainly alternates between rubbing writing paper on a smooth surface and rubbing wax paper on a rough surface, the task broken up only by the use of sleigh bells in Canons 4a/4b and a single tamtam stroke at the end of Canon 3b. Other noise effects show the influence of Lachenmann, most notably his piece Guero, whose technique of gliding fingernails across the piano keyboards is directly borrowed in Schnee.

The very first canon fulfils the evocative trajectory of the title, beginning on a repeated violin harmonic on an A♮ that’s so high, you mainly hear bowing noise (the score says “like an icy whisper”, though North American listeners might find it inadvertently reminiscent of a certain cinematic shower scene). Pentatonic white note tinkerings in the 1st Piano’s top octave soon enter (E-A-F-D-E is a prominent pattern), and one might wonder if this will be a characteristically long and static exposition of European postminimalism. But the complexity increases as the canons proceed, reaching an apogee in the third canon pair where the harmonies are atonal, the rhythms unmetered, and the pitch range fully extended to the bass register (intensified by tuning the cello’s lowest string from C down to G). The process then reverses in the last two canon pairs, and we eventually revert to the white note pentatonicism of the opening. It’s the simultaneous revelation of both arch-like vectors (range and complexity) and straight-line vectors (length and detuning) as the work progresses that gives Schnee such dramatic impact.

The influence of Feldman is often close at hand in Abrahamsen’s music, and it’s quite obvious in Schnee’s Canon 3b. But a different parallel can be found with Feldman’s Three Voices, a unique and uncharacteristically texted and beat-driven work from 1982 that in its repetitions, quirky metricality, overall length and architecture based on concurrent unfolding of both linear and arch-shaped processes, is a tantalizing predecessor to Schnee. It even features as its sole lyric this most apropos poetic snippet by Frank O’Hara:

Who’d have thought
that snow falls

Schnee is the kind of piece that can die in a too-dry space, but [untitled]’s idiosyncratic venue is just live enough to avoid this pitfall. Being designed as an entry and reception point rather than as a performance space though, it does come at the cost of an omnipresent background rumble from the building’s HVAC system. This often overwhelmed the subtle piano resonance effects and smeared the rhythmic definition of the percussionist’s paper shuffling (both prominent in Canon 3b). But the piece would have gotten lost in either of the two conventional concert spaces at Benaroya Hall, and the capable ensemble, drawn from regular Seattle Symphony musicians with frequent adjuncts Cristina Valdés and Oksana Ezhokina handling the piano parts, managed to traverse the work’s rhythmic complexities with no trace of strain or sloppiness.

They also did something perhaps more remarkable: avoiding the temptation, especially in the excitement of live performance, to play this music too loudly, too quickly and too brashly. Abrahamsen’s bleak snowscapes, like Varèse’s deserts, are those of the mind as much as of nature. What this piece needs is not so much the brisk extroversion of Ludovic Morlot, but a healthy dose of Scandinavian reserve, which it received under the conducting of Thomas Dausgaard, who will assume Morlot’s role as Music Director next season. In this performance, the first of this piece for any of the evening’s musicians (including Dausgaard), we perhaps have a glimpse of the direction that the Symphony’s programming will take under Dausgaard’s leadership.

Abrahamsen, born in 1952, presents an unusual musical example of a late career breakthrough. He started out as a Danish representative of New Simplicity, but much of his music from that period now seems rather…simplistic. After a Schoenbergian decade of relative silence, Abrahamsen reemerged with a more synthetic style that elevated his international profile to the degree that he can now be reasonably considered the most prominent living Danish composer other than the venerable Per Nørgård (1932–).

The best survey of Abrahamsen’s career arc is the Arditti Quartet’s recording of his String Quartets 1–4, whose dates range from 1973 to 2012 (this album was one of my favorites of 2017). His recent hits include some orchestral songs for Barbara Hannigan and a concerto for piano left hand, but these works seem less distinguished to me measured against the formidable European corpus of modernist orchestral music. It’s Schnee, completed in 2008, that continues to stand as Abrahamsen’s masterpiece, comparable in scope and ambition to Haas’ In Vain, and likewise exemplifying the alloy of exploration and consolidation that characterizes the most accomplished of contemporary European art music. Its reputation as one of the classics of the young 21st century (advanced by the likes of Paul Griffiths, who chose it to conclude the current version of his book Modern Music and After), was given powerful witness by Dausgaard and the Seattle Symphony musicians.

The score to Schnee is available online here.