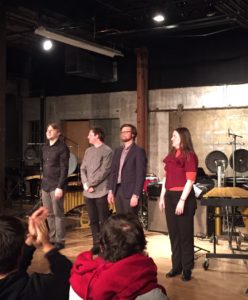 The latest wasteLAnd concert at Art Share in downtown Los Angeles was Friday, December 14, 2018 and drew a good sized crowd for five works featuring percussion and voice. Soprano Stephanie Aston and percussionists Dustin Donahue, Sean Dowgray and Ryan Nestor were on hand for a concert whose title, Capacity, was taken from the middle movement of a work by wasteLAnd featured composer Katherine Young.

The first piece on the program was Difficulties Putting it Into Practice, by Simon Steen-Andersen. Ryan Nestor and Sean Dowgray arrived on the stage and seated themselves at a table containing a number of paper sheets and cardboard scraps, along with two microphones. They each picked up a sheet of cardboard that had been cut with evenly-placed vertical slits and began blowing as they moved these back and forth horizontally. The result was something like a puffing steam engine, with intriguing variations arising from their relative synchronization and breathing patterns. Vocal tones were added, along with chattering teeth and occasional whistling or humming to create an amazingly varied assortment of sounds. All of this was accomplished with any common pulse or beat, although at times there seemed to be coordination while other stretches had a more random character. Towards the end Nestor and Dowgray were heard scribbling loudly on some sheets of paper, like office workers stuck behind their desks on a sunny day. Difficulties Putting it Into Practice is a marvelously resourceful work, conjuring all manner of sounds from simple materials, and performed with a convincing flair by Nestor and Dowgray.

Adiantum-Capillus Veneris, by Chaya Czernowin followed, a piece for solo voice performed Stephanie Aston. This began with slow, thin breaths of air streamed over the microphone, like the whisper of a breeze in some remote canyon. Soft rising tones were heard, and despite singing with her mouth closed, Ms. Aston produced a delicate and beautifully pure sound that added to the sense of isolation. A deep breath of air followed, then more high, thin tones sung faintly, but with flawless intonation and pitch control. Adiantum-Capillus Veneris invites close listening, and the audience was drawn willingly into its private spaces by Aston’s masterfully understated realization.

Next up was Urlicht, by Richard Barrett. Nestor and Dowgray were joined by fellow percussionist Dustin Donahue, all stationed behind vibraphones with assorted drums, cymbals and bells. Urlicht began with a short series of strong tutti chords on the vibraphones that clanged loudly like large bells before softly decaying into the silence. The vibraphone plates were then bowed at all three stations, creating a dreamy, mystical feel. The bowing continued, filling the air with a lovely, rarefied mist of sound. At one point some short, thin wires welded to what seemed to be an old trombone mute were also bowed, sending out a needle-sharp high note that soared satisfyingly to the top of the texture. The playing at low dynamic levels and the coordination between the players was superb.

As all this bowing continued, solitary mallet notes appeared, like welcoming streetlights in a thick fog. Stronger vibraphone tones followed, then some drumming and cymbal clashes. At one point, a long cardboard tube wrapped with twine was stroked with a stick, and this sent a series of short, sharp rattles into the air. The sounds gradually became more powerful and more fully percussive, with complex passages passed back and forth among the players. A huge crash was followed by a return to the quiet bowing of the vibraphone plates completing the piece. Urlicht is an exquisite showcase of vibraphone bowing and contrasting percussion, skillfully performed for this concert and enthusiastically received.

Releasing Bound Water from Green Material, by Katherine Young followed the intermission. Ms. Young is the wasteLAnd featured composer for this season and her three-movement piece included videos projected over a large array of gongs, vibraphones and other percussion pieces that crowded the stage. The opening movement, “Binding-Releasing I,” was accompanied by a blurry video of what seemed to be a turtle swimming in shallow water. The music coming from the percussion stations was spare and otherworldly, as if we were observing some alien habitat. Several ominously loud strikes on the gongs signaled the end of this movement, foreshadowing an unspecified peril to this innocent ecosystem.

“Capacity”, movement II, was even more unsettling. The video displayed a close-up of a bubbling cauldron full of unidentifiable clumps of matter and noxious vapors. Tones from the gongs increased independently, becoming more and more complex, adding to the sinister atmosphere. Powerful drum beats were heard and a sudden snare roll increased the tension. The fluid in the cauldron was now boiling off while the percussion sounds became more disconnected and intense. The final images of a barren, slag-filled surface seen through waves of shimmering heat was truly frightening and a metaphor for the dire predictions of climate change. The final movement “Binding-Releasing II” had a much quieter, almost desolate feel, full of soft atmospherics. The video was of a rotating machine with wooden gears, as if civilization had retreated to a primal technology. Releasing Bound Water from Green Material is a compelling premonition of our vulnerability in a problematic future.

The final piece in the concert program was Five Songs, by Andrew McIntosh, performed by the three percussionists and Ms. Aston. The five sections were short, just a few minutes each, but all were very expressive. The first opened with a strong chord from both vibraphones and a two-note soprano phrase that hovered lightly overhead. There was nothing loud or flashy in any of this, and the ensemble was informed with a pleasing restraint. Other sections, by turns, felt isolated, remote, questioning or mystical – but all were poised and balanced. The last section managed to be optimistic and comforting at the same time, especially in the spare soprano line and bowed vibraphone tones that quietly concluded this elegant collection of Five Songs.

The next wasteLAnd concert at Art Share LA will be Master of Disguises: Voices, instruments, love songs on February 16, 2019 at 8:00 PM.