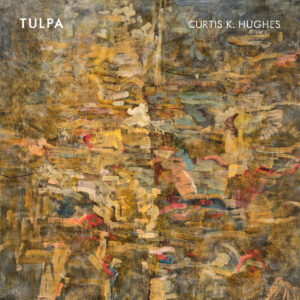 “Tulpa is a term appropriated by 20th century theosophists from Tibetan Buddhism to refer to a manifestation of a physical being generated purely by thought, sometimes also likened to an imaginary friend, a doppelgänger, or a shadow version of the self.”

Curtis K. Hughes is Professor of Composition at Boston Conservatory. Tulpa is his second portrait CD and the programmed works span from 1995 to 2017. There is a consistency from the earliest to most recent works, with the principle change being an  ever more assured compositional voice and a major work in Tulpa, a 2017 piece for ensemble.

The program is designed with several miniatures between the larger works, serving as interludes. Flagrant (2008) is a snare drum solo. Despite the reduced means at his disposal, Hughes imaginatively deploys various techniques and an overall approach to strikes on the drum that bring out a number of colors in zesty gestures. This segues nicely into the percussion ensemble piece Antechamber (2015). Played by the Boston Percussion Group, the piece is both colorful and varied in gestural profile. Some parts adopt fulsome grooves, while others are pointillist, with seamless transitions between demeanors.

Lesson Plan (2007) is a piece for bass clarinet dedicated to Lee Hyla on his departure from Boston for Chicago. Since the composer’s untimely passing, it serves as an affectionate homage through various quotes and a buffo blues cast. Merger (2016), for two cellos, is one of the finest pieces here in terms of construction. Angular counterpoint and hockets between the instruments are offset by piquant harmonies.

Wingtones (2009) for clarinet and piano, is cast in two movements. The first is a loose rondo. After a potboiler introduction, there is a Hindemithian fugue opener that is gradually discarded for a swing section. A slower paced fantasy ensues that once again returns to the swing section followed by a coda with flutter tongue and unison melodies. The second movement is more reflective, a fantasy that part way through speeds up and  interpolates the swing from the previous movement. Despite occasional interjections of fast music, cascades of arpeggios and altissimo clarinet playing are reasserted. The piece closes with lush harmonies and tremolandos.

It Was Not Raining (1995) is the final interlude, a piece for solo marimba that features rhythmic canons and multi-mallet technique. This is followed by the title work, a piece for large ensemble cast in four movements. The first movement, “i. telophase,” features pitched percussion and piano creating a swath of disjunct melodies. The other instruments join in a contrasting lyrical section. Gradually the two strands merge in a propulsive stream now buoyed by ostinatos. A brash unison melody provides the first climactic passage of the piece. Things go sideways in “ii. (manufactured for a purpose),” with a section for low winds followed by a tantalizing brief violin solo interrupted by a cadenza for piano and percussion. Winds and percussion cohere into a fast-shifting section of glinting harmonies. The strings, led by two low cellos, are then added to the proceedings, providing a syncopated backdrop for a more straightforward ostinato by clarinet, percussion, and piano. Gradually, their disparate grids combine into a fulsome workout, which leads directly into “iii. ‘un amour inconnu…’,” an evocative setting of a short passage from Proust’s Swann’s Way, sung with impressive microtonal inflections by soprano Rose Hegele. The final movement, “iv. the number of completion,” begins with a bassoon solo that is quickly succeeded by vibrant percussion, into which it reinserts itself,both gradually taking up a unison theme before the entire ensemble takes up disjunct fast lines that are passed from instrument to instrument. The piece concludes with a ferocious pileup of thick chords in repeated eighth notes. Tulpa is engaging throughout, and seems to be a culmination of the other, smaller, compositions on the CD. Whether for soloists or writ large, Hughes writes compelling music that is artfully crafted and energetically appealing.

Sequenza 21 has the pleasure of premiering a live performance video of Merger.

Tulpa will be released on Friday April 16th.