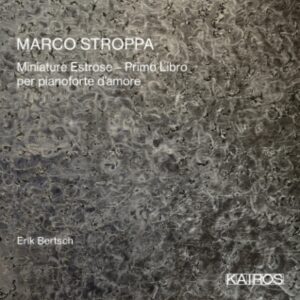 Pianist Erik Bertsch’s debut recording for Kairos is of composer Marco Stroppa’s most highly regarded piano works, the first book of Miniature Estrose. Bertsch was the first pianist to perform it in its entirety in Italy. The overall arch of the complete cycle of piano pieces, including a second book, has been sketched but not yet released. Even its partial completion is an impressive hour long demonstration of the capabilities of the piano in the twenty-first century.

The first selection on the CD, Passacaglia canonica, in contrappunto policromatico, is dedicated to Pierre-Laurent Aimard, reminding one of the auspicious pianists who have undertaken Miniature Estrose. Bertsch more than holds his own, crafting a detailed and energetic rendition of the piece with clear counterpoint and clarion interjections. On Birichino, come un furetto, incisive repeated notes in all registers are wittily deployed to demonstrate the roguish ferret of the title. Moai features sustained chords against rapid repeating notes, trills, and dissonant dyad pairs. As the piece progresses, intricate arpeggiations unfurl amid an increasingly emphatic demeanor.

Ninnananna is an exploration of repetition, but of a far more chromatic and embellished fashion than that of minimal music, concluding with enchanting bell-like timbres. Based on the Easter Island “bird-man” ritual, Tangata Manu is a varied creation, juxtaposing avian calls, ascending scales, insistently repeated notes, trills, inside-the-piano effects, and sustained bass sonorities. Innige Cavatina was written for Luciano Berio’s seventieth birthday. It is the piece most closely evoking the Romantic tradition, with bass octaves announcing dissonant verticals that are often echoed by enigmatically soft passages. The interplay of gestures in a wide dynamic range supplies the feeling of being aloft that is suggested by the composer’s description of the piece.

The CD’s final work, Prologos: Anagnorisis I. Canones diversi ad consequendum, is also its most expansive. A prologue, five sets of cyclic canons, and an extended epilogue, Stroppa likens the piece both to the toccata genre and to the moment of climax, the recognition of truth, in a Greek tragedy. The composer is artful in his deployment of the venerable genre of canon amid a virtuosic, postmodern atmosphere. Bertsch’s strategic pacing of Anagnorisis reveals its intricate dramatic structure. This is also true on a larger level. The pianist does a masterful job of navigating the entirety of Book 1 with assured technique and clarity of expression. One presumes he will be one of the first to assay Book 2.