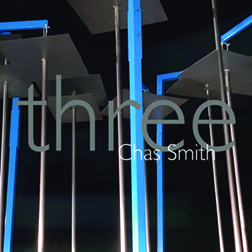 Three is a new CD release from Cold Blue Music by musician and master-machinist Chas Smith. Now residing in rural Grass Valley, California, Smith lived for many years in the San Fernando Valley, and this put him squarely in the center of the Los Angeles aerospace and movie industries. Smith was a student of James Tenney and Harold Budd, which led to later friendships with both men. Smith’s long experience as a machinist has resulted in the ability to fabricate specialized musical instruments and intriguing sound sculptures. His industrial metalworking is no doubt still in use, and his sound sculptures have been heard in a number of feature films. Several of these mechanical creations, with evocative names such as Que Lastas, Bertoia, Lockheed, Towers and Parabaloid, are heard on this new CD. Smith is also an accomplished steel guitarist and performs on two of the tracks. Chas Smith follows in the footsteps of pioneer Harry Partch and others who have conceived, designed and built their own instruments in order to realize a unique musical vision.

What does all this sound like? The press release declares that Three evokes “…a world of expansive musical tapestries, carefully woven textures, that evolve via slow, constant processes of change.” All of the tracks share a common form: an ambient cloud of sound, always in slow motion and subtly changing its emotional coloring.

Distance, the first track, opens with a buzzing and zooming sound while a sustained musical tone enters underneath. There are a variety of sounds present, but they all work together with exceptional coherence to create a warm glow. There is a sense of movement and power in lower registers that quietly rises and falls, as if passing by the listener at a distance. A low humming, like the beating of a multi-engine propeller aircraft is suggested, but this never dominates. No fewer than seven of Smith’s sonic sculptures and his steel guitar are included on this piece, yet these elements are perfectly realized and artfully mixed; they are always musical yet never lose their suggestion of the mechanical. The sounds are consistently engaging, but raise no expectations through tension and release. In the last two minutes bass pedal tones predominate, gradually reducing the sensation of movement and power as Distance fades to a deep finish, completing a captivating journey.

The Replicant, track 2, has a very different feel, starting with a deep, spacey sound that carries a mysterious, alien coolness and a sense of vast emptiness. There are artful combinations of musical tones and steely sounds, but in this piece a greater contrast is heard with the mechanical, now mostly in the foreground. Steely sounds in the middle registers seem to quiver like long, vibrating rods. Chimes are also heard, slightly less resonant than, say, church tower bells, but still well-shaped and full of presence. At about seven minutes in, deep, throbbing bass tones are heard, like the snoring of some great sleeping beast. As the piece proceeds, the texture is consistently rich but always changing on its surface. There is a gradual decrescendo in the final stages, as if we are slipping away in a dream.

The Replicant clearly features the mechanical sounds more prominently and while they often dominate, they are never intimidating. Smith’s realizations occupy a perfect middle ground between sound and music in the listener’s brain, and this works to expand one’s aural perception. Beautifully mixed and processed, The Replicant beguiles and engages.

The final track is The End of Cognizance and this acts as a summing up of all the sounds heard on this album. The structure is similar to the earlier tracks, but fewer of Smith’s sound sculptures are included. The End of Cognizance has an upward-looking feel, managing to be simultaneously introspective and optimistic. Bright, mechanical chiming dominates, especially in the upper registers, with continuous tones accompanying in the bass. The experience resembles being inside a large wind-up clock and the mechanical undercurrent is artfully combined with the sunny sounds of the chimes. As this piece proceeds, a soft growling is heard in the deep registers as the metallic sounds become lower in pitch, darker and more ominous. An increase in the harsher metallic sounds soon overtakes the more musical elements below. By 10:00 all this attains an intent that now feels malevolent. At about 14:40, several higher pitched chimes are heard, solitary and spaced out, like welcome beacons of hope shining forth from the gathering gloom. The chimes descend again to the lower registers, like the sinking of a ship, with a long decrescendo and the thinning of texture until the piece fades to a finish.

The End of Cognizance, as with the other tracks, is masterfully realized and brings beauty to the ear. The mix of musical and mechanically generated sound is seamless. The recording was by Chas Smith in his studio at Grass Valley and the mastering by Scott Fraser in Los Angeles – and the results are truly impressive. Three achieves a level of integration between the sound sculptures and a steel guitar that reach out to new musical horizons. We can all look forward to hearing more from Grass Valley.