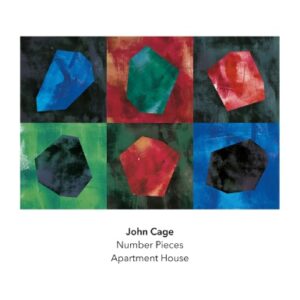 John Cage’s Number Pieces, late compositions (from 1987-1992) are given two designations, a number indicating the size of the ensemble and a superscript indicating its order in multiple pieces for the same-sized grouping (Quintet #2 = 52). Fragments of pitches, sometimes single notes, are indicated; dynamics appear sporadically. Rhythm is codified through the use of “time brackets,” indicating how long before a performer can move to another fragment. Most of the pieces are for a particular instrumentation, although a few are unspecified. Thus, while a considerable amount of interpretation remains in the performers’ hands, Number Pieces are less aleatoric than many of Cage’s works from the 1950s to the early 1980s. Commentators have likened some of them to Morton Feldman’s compositions, as both regularly employ soft dynamics and slow tempi, with gradually evolving pitch collections accumulating into pointillist harmonies. While none of these pieces approach a pitch center, in addition to the numerous dissonances one might expect in a Cage piece, it is notable how many minor and major thirds appear in the texture.

Apartment House has recorded a quadruple CD set, released on Another Timbre, of all the number pieces for medium ensembles (from 5 up to 14). It includes some alternative versions and one of the “4” pieces. The group has previously released benchmark recordings on Another Timbre of other New York School repertoire and that of the Wandelweiser Collective, and are thus well-seasoned for this project. If anything, Apartment House surpasses expectations, making much of the subtle distinctions between pieces while presenting a comprehensive collection imbued with Cage’s late musical sensibilities. Excellent liner notes by label owner Simon Reynell help to put Number Pieces into perspective. Quotes from Cage’s late interviews, talks, and writings are edifying in and of themselves, and support the manner that Apartment House has inhabited the Number Pieces they interpret. John Cage: Number Pieces is Sequenza 21’s Recording of the Year.