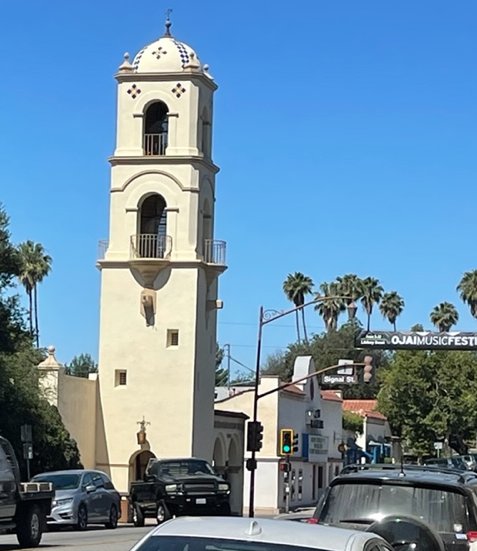 The 75th anniversary edition of the Ojai Music Festival opened on June 9 and ran through June 12, 2022. A full program was scheduled by Music Director Zack Winokur including 17 core artists, 20 collaborators and participation by the American Modern Opera Company (AMOC). A wide variety of music was planned, from J.S. Bach to Andrew McIntosh and included a world premier by Matthew Aucoin. The Ojai weather was perfect and a sizable crowd surged in and around Libbey Park, almost as if the pandemic had never happened.

The Friday morning concert, titled Eastman, was given over entirely to the works of Julius Eastman and featured cellist Seth Parker Woods with five other musicians from AMOC, all led by director Zack Winokur. Davóne Tines, bass-baritone, wrote that each collaborator in the ensemble made a commitment to “…meet weekly, for over a year, to discover and digest Julius Eastman’s work, share personal stories about what his absence from our educations has meant, play his music and the music of his contemporaries, and build a collective knowledge and informed performance practice together. This work has culminated in more than just a concert, but a way of working collegially and collaboratively – with care and holistic engagement of material that seeks to honor it through deep conceptualization. This is our effort to pay homage,”

Julius Eastman was gay, Black and a composer of new music at a time when none of these things were popular. He died too young and penniless. Eastman’s long and difficult struggles might naturally be expected to inform his music with a certain anger and exasperation. The genius of this concert, however, was that of the five pieces selected for performance, the first four were grounded in a spirituality that illuminates Eastman’s music in a new and compelling way. This, along with the extraordinary dedication of the ensemble to thoroughly explore this music through extensive rehearsal, resulted in a truly memorable performance.

The first piece on the program was Our Father and, although one of Eastman’s last works, was the perfect invocation. Davóne Tines deep voice led with a powerful chant accompanied by the double bass and cello. The feeling was almost medieval with long sustained tones and spare harmonies that would have been at home in any cathedral. Eastman’s formative years were spent singing in church, and this influence was clearly very strong, even in his later career. Budda followed, a more evocative piece with soft piano notes and long, extended tones in the other instruments punctuated by pizzicato notes in the double bass. The vocal line was wordless and consisted of sustained tones. The lovely harmonies that formed give this piece an exotic and transcendental feeling.

Gay Guerrilla was next, opening with solemn, repeating phrases in the piano that evoke an air of expectation. Soon, four hands on the piano built up the density and tension. The piece proceeds in a general crescendo, and as the other instruments of the ensemble enter, there is a definite minimalist vibe. The sound turns more dramatic as the extraordinary bass voice of Davóne Tines enters in the lowest possible register, adding a sense of the ominous to the already anxious feel in the ensemble. The playing is expressive, yet disciplined, even as the drama builds. The dynamic increases and the entire ensemble is now engaged in full voice – the volume developed by such a small group is impressive. Dissonance creeps in, adding menace to the texture. The bass voice enters, again in a very low register, evoking an almost Biblical sense of judgment.

As the piece proceeds from this point, the intensity rises and falls, but the dynamic is always building with the sound becoming almost primal at times. The bass voice enters to dominate, quoting the text of “A Mighty Fortress” with all the power and immediacy of Luther’s original hymn. The ensemble is now at full cry and along with the deep bass vocal, the feeling becomes one of great strength. Gay Guerrilla is not animated by political activism or anger, but rather by the immense power of Eastman’s inner spiritual resources – a true masterpiece.

Prelude to the Holy Presence of Joan d’ Arc followed, perhaps the most overtly religious piece in the program. Davóne Tines again leads the way, chanting a series of repeating phrases: “Saint Michael said”, Saint Catharine said”, “Joan speak boldly.” The impact of Tine’s strong voice increases as these phrases are repeated over and over, sometimes singly and sometimes connected together. The accompaniment is all but submerged by the mighty words; this is praying that would be at home in any church. Eastman appeals to the saint directly, as the program notes state: “Dear Joan, I have dedicated myself to the liberation of my own person firstly. I shall emancipate myself from the materialistic dreams of my parents; I shall emancipate myself from the bind of the past and the present, I shall emancipate myself from myself.” Written just before he became homeless, Prelude to the Holy Presence of Joan d’ Arc is further evidence of Eastman’s remarkable inward strength.

Stay On It finished the concert, and this was an inspired bit of programming. One of Eastman’s earlier works, it is upbeat and optimistic, fueled by a relentless improvisational joy. The ensemble was bouncy, but precise, with sunny repeating phrases and a pleasing groove. A strong drum beat added to the intensity of the texture as the bass voice loudly proclaimed “Stay On It!”; one could only marvel at Davóne Tines vocal stamina. At about the midpoint of the piece, the rhythms became syncopated and irregular, and “Stay On It’ is now heard as encouragement. The ensemble then resumes with its initial energy, reaching an almost Caribbean level of exuberance. This cycle of musical dissembly and recovery recurs so that “Stay On It!” becomes an outright exhortation. When heard through the lens of the previous Eastman pieces in this concert program, Stay On It becomes a statement of the composer’s dedication to his art, ‘staying on it’ despite the many challenges he encountered.

The group of musicians performing this concert at the 2022 Ojai Music Festival are based in Los Angeles and have demonstrated an extraordinary commitment to the music of Julius Eastman. This level of dedication and expertise deserves a wider audience – we can only hope that the larger performance venues in Southern California will schedule them soon.