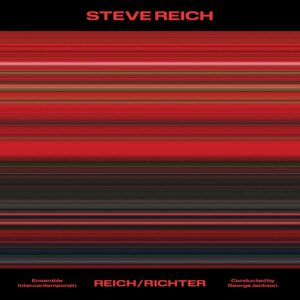 Steve Reich has long admired the artwork of Gerhard Richter, whose abstraction and ties to minimalism seem tailor-made for a collaboration with the composer. The artist’s film Moving Picture (946-3), made with Corrina Belz and based on Richter’s book Patterns, provided just such an opportunity. Reich/Richter was composed to be performed alongside the film and has received over a hundred performances at screenings starting in 2019. This audio recording of the work is amply diverting on its own.

The piece is recognizably Reich, with ostinatos, polyrhythms and full-bodied harmonies interacting throughout. The use of pitched percussion, piano, and strings (with a particularly rangy double bass part) creates a sinfonietta that is an extension of the instrumentation of many of Reich’s key works. The use of wide-ranging soloistic passages in the winds is particularly suitable for Ensemble Intercontemporain. However, it would be a mistake merely to analogize it to past works. Reich/Richter is distinctive in its own right. Directedness of harmonic progressions, which in interior cadences are sometimes thwarted by deceptive fakes but in closing sections are emphatic, suggests a harmonic scaffolding with considerable long-term planning. The structuring of rhythm is rigorous as well. Belz talked about the film’s organization into “pixels,” and Reich used a time scale of rhythmic values to respond to rows of pixels. The end result breaks up the composer’s trusty polyrhythms into different, at times surprising, groupings.

Ensemble Intercontemporain, conducted by George Jackson, perform a rhythmically incisive and expressive rendition of Reich/Richter. Not so many years ago, the group performing Reich would have been beyond the pale. It is refreshing that those stylistic barriers have fallen so that excellent ensembles known for their interpretations of modernism can have a crack at minimalism. Reich/Richter is a vivid and arresting work that shows as many departures by its octogenarian creator as mainstays of Reich’s creativity.