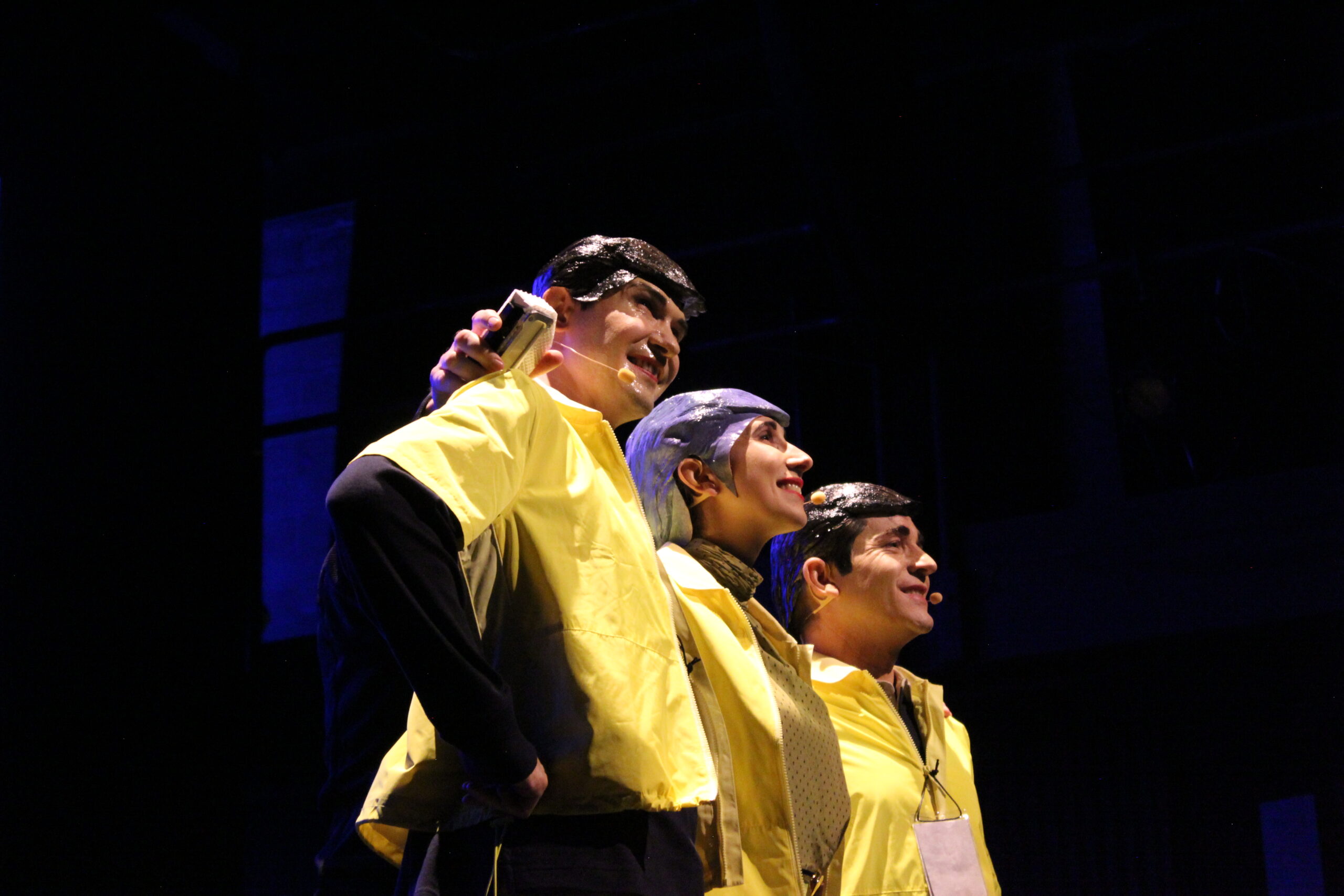 The much-anticipated Synchromy Opera Festival was presented at Boston Court, Pasadena, over June 4 and 5, with two sold-out performances for a pair of world premiere productions. The Double, by Vera Ivanova and Roman, by Ian Dicke, filled the larger space at Boston Court with imaginative stagecraft and powerful music performed by first-rate musicians and excellent singers. Both operas dealt with the unintended effects of technology on ordinary people and both succeed in artfully delivering a cautionary message to engaged and attentive audiences. This review will cover The Double, the first opera on the program, and a separate review will be posted for Roman.

The Double loosely follows the experiences of an ordinary man named Noth, who desires a better life through a new app-based psychological therapy. Although we aren’t told exactly how this therapy works, it is apparently “text-based and mobile”, an obvious reference to our ubiquitous cell phones. The opening features Noth, tenor Jon Lee Keenan, and the Therapist, baritone Scott Graff, singing a bright duo “A Better You” praising this latest innovation in therapeutic technology. The music here is bouncy and light as with an ad jingle, but with a slightly menacing undercurrent. As the plot synopsis explains: “Noth, a low-level office worker, states that he came to the therapist a month ago, with low self esteem, but now things seem to be worse.”

The Brightwork Ensemble provided the musical forces for The Double and included a piano, violin, cello, flute, clarinet and percussion. These were ranged along the back of the stage and directed by Marc Lowenstein. The stage was otherwise bare with no scenery so that the cast of just four singers had to carry the text, the plot and provide all the action. A full-size screen provided for projections and the sound engineering and lighting were under the capable direction Nicholas Tipp and Alejandro Melendez, respectively.

Throughout The Double, composer Ivanova kept the musicians busy with moving lines and plenty of notes while astutely giving the singers long, sustained tones that arc above the active texture of the accompaniment. This allowed for a clear delivery of their lines as well as space for greater dramatic expression. The sung text was projected at the top of the screen and this was helpful even though all the sounds were well balanced and the miked-up singers were almost always intelligible.

As the plot unfolds, Noth’s fellow office worker, Klara, sung by soprano Anna Schubert, also begins the new therapy in an attempt to exchange her dull life for “money, power, freedom and adventure.” Meanwhile, as Noth continues his emotional decline, a better version of him has actually emerged in the form of a physical Double. The casting of the elegant and taller Timur is inspired here – the extraordinary range of his voice gives the Double a vaguely alien presence. Klara, who is becoming more assertive through her therapy, meets the Double and is immediately attracted to him. Eventually, Klara and the Double marry in a ceremony presided over by the Therapist and witnessed by the heartbroken Noth. The Therapist binds Klara and the Double together with a long scarf, even as Klara sings powerfully about attaining wealth and freedom. This moment briefly recalls Das Rheingold when Alberich finally attains power and wealth, but must forfeit love. As the opera ends, Noth is reduced to ‘Noth ing’, now completely broken down by the therapy while his life has been appropriated by his better Double.

The Double is a beautifully precise and masterful work with careful attention to every aspect of the production. Dr. Ivanova’s music is exquisitely detailed, agile and always informing the action. The accompaniment provided by the Brightwork Ensemble was clear-cut and nimble, instantly changing direction as needed to support the emotions of the moment on stage. The singing was confident, assured and delivered with great expression. The costume design by Lena Sands and make-up had just the right balance between the imaginary and the real. Even the staged movements of the cast more than made up for the absence of impressive scenery. The sound and lighting complimented the production completely and the direction by Alexander Gedeon brought out the best in an already talented cast. It is gratifying to know that serious opera can be staged with such splendid results without requiring huge financial resources. Congratulations to Synchromy for stepping up to the challenge.

While the music, staging and libretto are all artistically impressive, they also invite the audience to consider deeper questions layered within this compelling story. As Librettist Sarah LaBrie writes: “When Vera Ivanova approached me with this project, my first thought was that this story would offer an incredible opportunity to play with the concept of identity and the way it changes as our lives migrate increasingly online. Now, however, I’ve come to understand that the significance of The Double to our current cultural moment runs much deeper than that. In 2022, many of us are coming to terms with what it means to be a citizen of a country founded on a dream that clashes glaringly with the reality many of us confront.”

The Double brilliantly accomplishes what opera is meant to do: engage the audience to think about the wider consequences of progress and new technology on human relationships.

Photo by Richard An – courtesy of Synchromy, used with permission