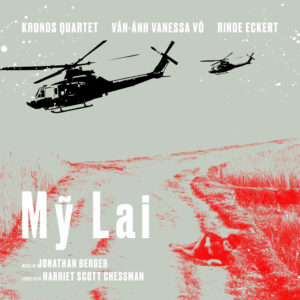 In one of its most ambitious projects to date, Kronos Quartet has recorded Mỹ Lai, an opera by composer Jonathan Berger (Professor at Stanford University) and librettist Harriet Scott Chessman, who has also written a libretto for Georg Friedrich Haas’s next opera. Vocalist Rinde Eckerdt and multi-instrumentalist Vân-Ánh Vanessa Vo ̃ joined Kronos to create an East/West musical hybrid, with t’rưng, đàn bầu, and đàn tranh, traditional Vietnamese instruments, being added to the string quartet instrumentation.

The story of Mỹ Lai is one of brutality against civilians, over 500 killed by the U.S. Army in one village, and of an officer who sought to stem the massacre. Warrant Officer Hugh Thompson put his helicopter between the miscreant soldiers and noncombatants, to little avail. Later he refused to remain silent about the massacre, leaving him a pariah for much of his life. Today, we see the bombing of civilians in Ukraine and call it what it is, a war crime. During the post-Vietnam era, there was tremendous conflict about whether the United States was justified for its involvement in the war.  Mỹ Lai came to be exhibit A for those who felt that war crimes were never justifiable and that there had been a significant amount of atrocities committed by the Americans.

It is a truly operatic subject, and Berger integrates the various musical forces to heighten the dramatic tension inherent in the story. The string quartet is provided with post-minimal figurations that reminds one of their works with Steve Reich. The strings often break off into plaintive counterpoint. Most compelling are the interludes in which Kronos and Vo ̃ play together, integrating their two technical backgrounds into fascinating textural combinations. It is worth noting that the quartet bridges the gap from West to East. Their considerable experience playing non-Western music is displayed in their keen deployment of sliding tones and strummed passages.

Eckerdt’s performance is captivating, with stalwart reportage of the events unfolding, aching high notes in passages exhorting his fellow soldiers to stop the massacre, and sensitive piano singing in reflective sections. The addition of spoken word footage supports the narrative and adds another multimedia component to the piece.

Four decades on, collective memory is fading about the controversy over atrocities in the Vietnam conflict. Art can serve as a reminder, an exhortation not to forget lives lost and brutality enacted. Berger and Chessman have created an opera that speaks as much to today as it is a valuable history lesson. Once again, Kronos has taken on a piece with great resonance for our society.