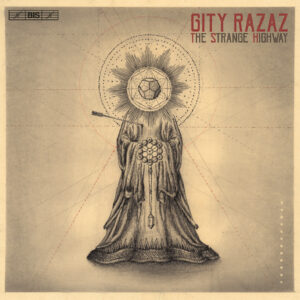 Born in Iran and now residing in New York, over the past fifteen years composer Gity Razaz has created a number of well-crafted works. The Strange Highway, her first portrait CD, includes chamber music, ensemble works, and electronics in live and studio recordings.

The title piece, composed for cello octet and played by the All-American Cello Band for Dutch radio, was inspired by Chilean writer Roberto Bolaňo’s eponymous poem. It features outer sections of considerable intensity, with forte tutti ostinatos pressing the action forward. The central section begins to dissolve into solo lines and fragments of the ostinatos, only to bring lush harmonies to the fore. The final section reprises the intensity and material of the first.

Over the course of Duo’s two movements, the first angst-filled and the second boisterous, Razaz deconstructs and varies a single melody. The transformation from the cadenza passage of the first movement leading into a repurposed dancing melody for the second is well conceived. Violinist Francesa de Pasquale brings a limpid tone to the cadenzas and bright tone and incisive rhythms to the latter half of the piece. Pianist Scott Cuellar provides sonorous accompaniment to the opening and stands out in the muscular stabs of the fast section.

Razaz describes her solo viola work “Spellbound” as a soliloquy that features a melody that “hints at Persian music.” Katharina Kang Litton plays it with intensity and a fluid rhythmic sense. “Metamorphosis of Narcissus” is the title of a Salvador Dali painting. It is also the inspiration of the final piece on The Strange Highway. The myth itself has captivated Razaz and is an equal part of her considerations when composing the piece. The latter seems more resonant; not much surrealism is heard. An evocatively scored tone poem, “Metamorphosis of Narcissus” is crammed full of vividly orchestrated, lively motives. The Metropolitan Ensemble, conducted by Andrew Cyr, played this live at Le Poisson Rouge. They provide a detailed rendering of the piece. I was glad not to hear the tinkling of glasses in the background (how did they manage that?).

Cellist Ingbal Segev commissioned “Legend of Sigh” from Razaz. The work is the most extended on the recording – nineteen minutes in duration – and features atmospheric fixed electronics with overdubbed cello. The best parts of the piece make a “super-cello” out of overdubs, somewhat reminiscent of the textures in The Strange Highway’s central section. Descending glissandos are used to heighten tension throughout “Legend of Sigh’s” midpoint. As a foil, modal ascending passages provide a measure of consonance to the proceedings. A blustery section in the middle energizes both the cello and supplies clarion electronics. This is succeeded by an overdubbed ostinato accompaniment and high-lying sustained lines with bell-like electronics.

The second movement displays Segev’s abundant technical skill with a fleet cadenza followed by overdubbed pizzicatos. These two materials morph into the afore-mentioned “super-cello” texture in repeated sections accompanying triumphant ascending scales. Electronics return to accompany a poignant interlude. A sumptuous theme is then accompanied by all of the elements, including a new texture – cello choir playing arpeggiations – that affords a departure at the piece’s conclusion, with a little tag of electronics as an outro. A varied and compelling piece, “Legend of Sigh” is the most forward-looking offering on the recording. Razaz would do well to develop her creativity in this pocket.

Quite a promising portrait recording. Let’s hear some of Razaz’s operas next!