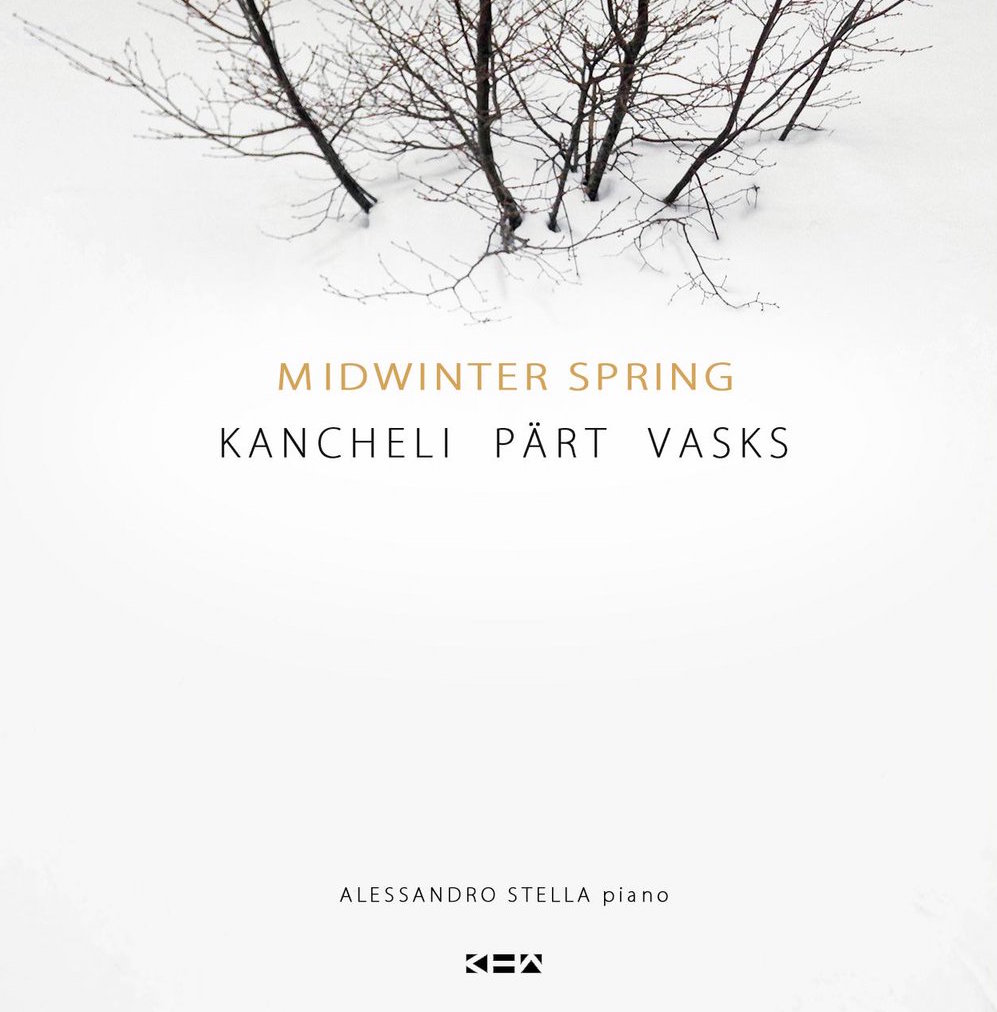 In a sea of pianists sailing toward contemporary shores, the vessel of Alessandro Stella stands out for its hydrodynamic contours. Stella has performed widely across Europe—more recently, in South America—and was central, among other projects, in reviving Giacinto Scelsi’s early chamber works under auspices of the Isabella Scelsi Foundation.

On Midwinter Spring, his first recital disc for Italy’s KHA Records, he presents works by Giya Kancheli, Arvo Pärt, and Pēteris Vasks. Even without the program in hand, one can already feel the possibilities for continuity and artful contrast between these composers. All three have gained worldwide notoriety for larger-scale symphonies, concertos, and choral masterpieces. Yet their piano repertoires, given due attention here, have yielded some of the more vital statements of classical expression in recent decades.

To begin, Stella offers 16 selections from Kancheli’s Simple Music for Piano, a collection of melodies written for stage and screen. First published in 2009 and divorced from its visual contexts, Simple Music has taken on a life of its own, not least of all in 2010’s Themes from the Songbook, released on ECM New Series. Yet where that album had a distinctively Piazzolla-esque veneer (due not least of all to the participation of bandoneón virtuoso Dino Saluzzi), here the themes breathe nakedly. Stella plays with an expressivity so holistic that one can practically hear him singing through the keyboard. A dancing quality that recalls the soundtracks of Eleni Karaindrou pervades these vignettes, each born of a nostalgia that, while distant at first, over the course of a listen morphs into something uniquely one’s own. Contrary to what the title would have us believe, there is nothing simple about this music, as evidenced in the way Stella approaches particular pieces. Whether in his evocation of moonlight in No. 23 (“Bear’s Kiss”) or the chromatic inflections of No. 25 (“Hamlet”), Stella’s attention to detail reveals incarnate patience.

Following these, Arvo Pärt’s Für Alina (1976) comes across even more cinematically. Images of stardust and other cosmic beauties may be easy go-tos for the reviewer’s metaphorical toolkit, but in this case any such descriptions would be apt. In the expanse of Pärt’s seminal tintinnabulations, the human heart begins to feel like a small satellite indeed. Stella’s treasure-seeking becomes more obvious in his choice of Variationen zur Gesundung von Arinuschka. Pärt’s 1977 composition describes a far more intimate universe. Its transitions from legato to pointillist notecraft indicate a robust inner child in composer and performer alike.

Baltā ainava (White Scenery) by Vasks brings about a logical conclusion. Composed 1981 and played exclusively on the white keys, it is, like the preceding works, as potentially infinite in resonance as it is fundamental in construction. Stella lays down its block chords with extra-musical awareness, giving each cluster room to breathe. Arpeggios in the left hand are contrasted by two-note motifs in the right, like footprints pressed into the album’s cover scenery toward unknown destinations. The uncertainty of it all makes it that much more inviting, and combines elements of Kancheli and Pärt with an indefinable third.

In the interest of gaining insider perspective, I conducted an e-mail interview with Mr. Stella, who was kind enough to elucidate some of the finer points of this project.

What inspired you to put these three composers together on one album?

What is common to these three great composers is a deep spirituality and an extraordinary ability to shape time and its perception.

The program is very cohesive, but I imagine that as the performer you have insights into how each piece is different from the others. Can you talk about compositional, emotional, or structural differences between them?

Kancheli, Pärt, and Vasks  have many things in common, being from the same generation and geographical area. Nevertheless, each has his own history and, of course, a recognizable style. Kancheli’s miniatures are based on his music for cinema and theater, which he wrote over a period of decades. Many are actual songs, like the first track of the album—the famous “Herio Bichebo” (see video above)—and are written in a tonal style. Some fragments and themes are recurrent in other compositions of Kancheli. The composer himself has said that he can’t always remember where a particular theme first appeared. The two Pärt compositions are the cornerstones of his tintinnabuli style, the result of seven long years of research and creative silence. This is a style in which the rigor of the tintinnabuli voice contrasts with the exceptional freedom of the principal voice. Lastly, the Vasks piece is built upon two fundamental ideas that alternate, vary, and repeat themselves in a hypnotic continuum. However, I must emphasize that what attracted me the most about these three composers, in addition to their distinctive features, is the role silence plays in their music. Each pause and resonance is of crucial importance and represents the music’s very essence.

How much preparation did you require to make this recording sound the way you wanted it to sound?

For some time I would play this music almost every day for my own pleasure and enrichment, until it was clear to me that I wanted to record it. I played, sang, recorded, and listened to this music for months. It was similar to the work of a sculptor who achieves the ultimate result by removing material until only that which is essential remains.

You once told me how pleased Kancheli was with your performances of his work. Can you expand on your communications with him throughout the recording process, and after?

About two years ago, I wrote to Maestro Kancheli explaining that I wanted to record some of his miniatures. He was enthusiastic about it and gave me his authorization, giving me as much freedom as possible in matters of selection and interpretive choices. About a year later, I sent him the CD as soon as it was finished. I was deeply moved by the words he expressed about my work. Last February (2016), I finally had the opportunity to meet him. The Italian Embassy in Georgia organized a concert in Tbilisi in his honor, so I had the great privilege to give the premiere in Georgia and to play his miniatures for piano in his presence. It was one of the most intense experiences of my entire life. 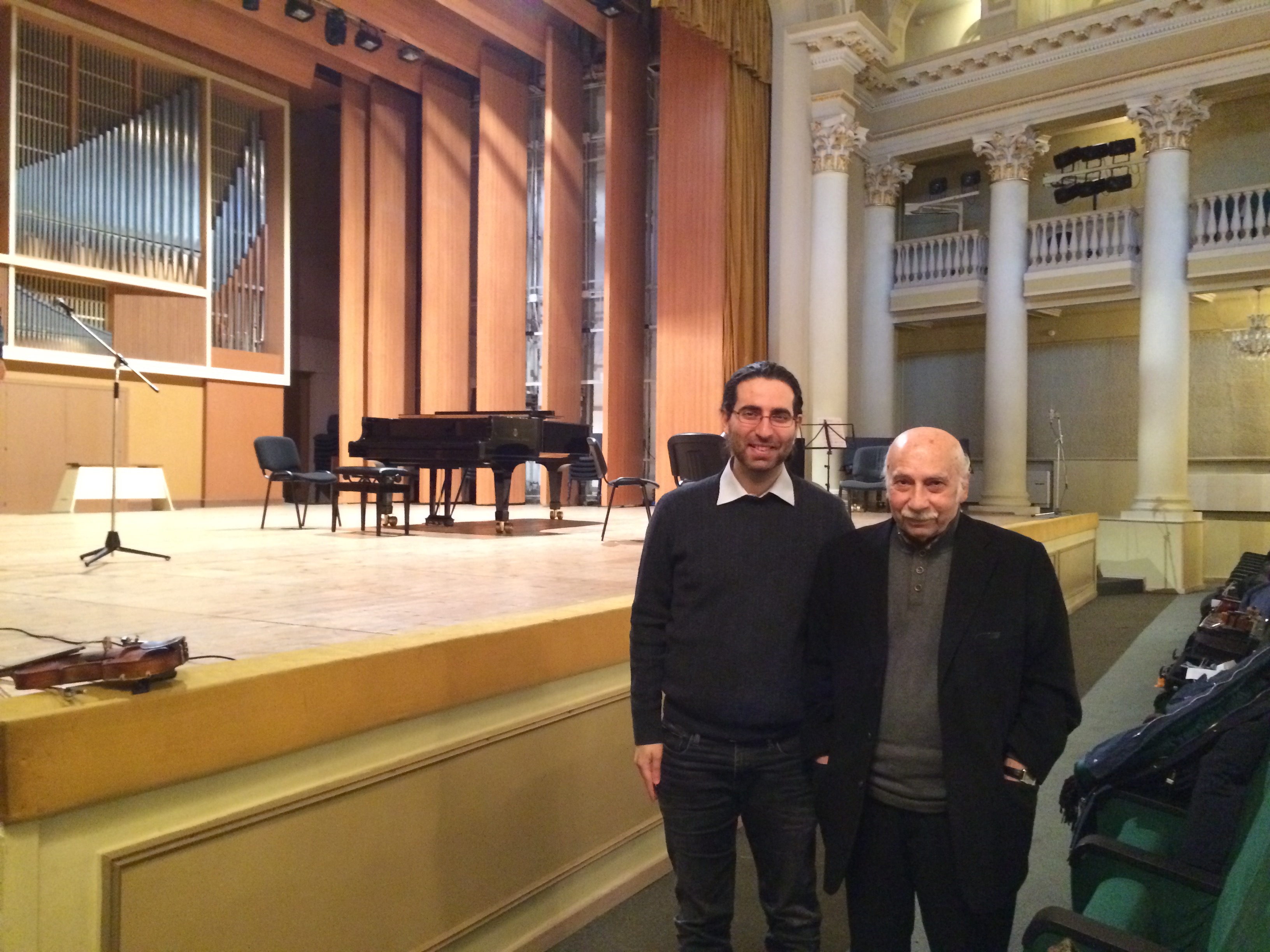 What is the overall message of the album for you, and what do you hope listeners will get from it?

Every new album is the result of deep reflections. The finished album is often different from how I thought it would be and this work of progressive “polishing” is essential to me. The idea, the initial intuition, however, usually does not change. If anything, it guides me in the right direction. It has always been clear to me that Midwinter Spring was supposed to be a journey out of time, insofar as we are used to perceiving it in our everyday life. Through this apparent simplicity, the music of Kancheli, Pärt, and Vasks makes us connect with our deepest life experiences. Everything in this album was conceived to serve this purpose: the drama of the track order, the cover, the pauses, even the title. I hope this album will be an intense emotional experience to those who listen to it; an experience they will be willing to repeat.

Have you performed this exact program in a live setting? If so, what were the audience reactions?

I presented the program for the first time live last December (2015) in Liverpool. After playing this music at home and in the studio for so long, sharing it with an audience was a truly special experience. I was afraid that the ritual of the concert would contrast with the extremely intimate nature of this music. But in the end, its extraordinary evocative power created an atmosphere of “magical suspension” during the concert. And this was confirmed to me by the beautiful words of the people I talked to afterward.

This music might easily be interpreted as melancholy, but there is also something hopeful about it. Do you agree with this, and if so, how do you make sure that balance is preserved when you are playing it?

I totally agree with this and this idea is at the center of the entire album, starting from the title, Midwinter Spring. Taken from a verse by T. S. Eliot, this expression evokes the hope for a new life, as expressed by the branches coming out of the snow on the album’s cover, symbolizing hope for rebirth. All of this is inherent to the music. Melancholy is the dominant feeling of the program, but there is much more in this music: in an instant you get carried from a sense of deep desolation to nostalgia for something that no longer exists; from the unreality of a dream to a sense of hope. The music itself evokes all these possibilities. And the artist has to grasp them and follow them, just letting the music talk to him.

Dream Syndicate, “Every Time You Come Around” (Bandcamp)