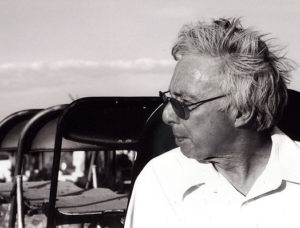 On August 21, 2016 the Ruth B. Shannon Center for the Performing Arts at Whittier College was the venue for a much-anticipated appearance by the distinguished composer Harold Budd. A fine Sunday crowd filled the auditorium, with many coming from a considerable distance to be part of this rare event. Mr. Budd was joined by Bradford Ellis and Veda Hille and the concert consisted of a single piece, Aurora Teardrops, that extended for 75 minutes. Prior to the beginning of the concert, a video of some California desert scenes by Jane Maru was projected on a large screen above the stage.

Harold Budd and Bradford Ellis arrived on stage and seated themselves behind separate keyboard/synthesizers while Ms. Hille took her place seated in front of a music stand and a boom microphone. The opening video complimented the music perfectly, which began with pure electronic sine tone, soon joined by a another in harmony. A series of cool, sustained pitches followed, creating a thin, ethereal feel – like looking at the stars in the clear desert night. There was no beat to the music and only a very slow-moving melody, but it cast a precise sense of distance and isolation, yet was absent of any trace of melancholy. After some minutes of this Veda Hille began the poetic narration with the words “Sundown, dark and dreamy…” capturing the mood exactly. The words were distinct and clearly heard above the soft background, like distant mountains in the desert etched against a gauzy blue sky.

The specific and concrete nature of the spoken verse added a sense of balance and structure to the free-form flow of the music. The poetry, written by Mr. Budd, continued in sections of a few minutes each, followed by an interlude where only the music was heard. Each segment of poetry sketched out a short vignette of a reminiscence – of living and loving in an earlier time – as if the composer was looking back on his life in a dream. The music was constant in character, though never tiresome, and framed the spoken memories with a warm glow. All of this was in accord with the insightful description of Budd’s music given in the program notes: “Like a number of Californian composers of his generation he has an interest in the more meditative forms of music, in the idea of a controlled musical environment, and in a sense of non-doctrinaire spirituality.” Ms. Hille occasionally sang a few words or hummed along with the music, adding an intimacy to the spoken verse.

The most touching poetry dealt with the relationship between Budd and his significant other. These sections are filled with a longing for a deeper connection – perhaps like the relationship a composer has with his art – but a relationship that is unattainable with another human. There is no sense of resentment in this, but rather a sadness in the realization that even the closest human relationships can only be conducted at a certain distance. In “So many centuries and I still think of you…” the feeling becomes even more poignant, reflecting loss, and deep bass tones are heard at intervals giving a darker and more profound color to the music. Towards the end of the piece “In tears and tatters” seemed to cry out with emptiness and longing, cementing the strongly empathetic connection with the audience, who remained completely engaged throughout. At the quiet conclusion of the work there was a prolonged silence, followed by a standing ovation.

As the performers returned for a well-deserved curtain call, Shane Cadman, manager of the Shannon Center described the complicated series of events that brought this concert to the stage. Mr. Budd had withdrawn from performing and composing, but was prevailed upon by his son to complete the poetry and music of Aurora Teardrops. With Cadman’s help this was realized in Southern California at Whittier College, despite a number of setbacks and postponements. Aurora Teardrops touches a common emotional chord in all of us, from a perspective that only a man of Harold Budd’s age and experience can provide. We are indeed fortunate that he has made the effort to bring this extraordinary work to us.