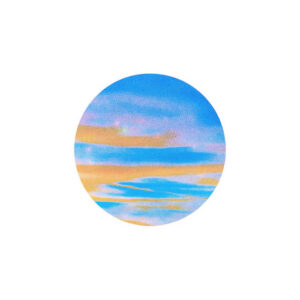 “touchless questions the phenomenology of touch, reaching to transcend the boundaries of the physical to embody touch while remaining touchless.” – Matt Evans

In 2019, Matt Evans lost his partner, the sculptor and eco-feminist artist Devra Freelander. He commemorates both grief and the light that came into his life as a result of their relationship on the recording touchless. Synthesizers, field recordings, piano, and additional acoustic instruments provided by guest musicians come together to create beguiling textures.

Two piano pieces bookend the recording, Arcto 2 and Arcto 1. Artco 2, which begins the recording, consists mostly of muted chords in reasonably predictable patterns, only to go sideways at the end and venture into significant chromaticism. Arcto 1 repeats a middle register drone against which a repeating chordal ostinato and water sounds contend.

Two other pieces that form a pair are “Solar Silhouette” and “Fluorescent Sunrise,” made of drones with extensive harmonics. The former is girded by octaves in bass and treble; rising glissandos populate the latter, perhaps as a slight programmatic evocation of sunrise.

The title track is the most elaborate, with a harmonic series reinforced by Tristan Kasten-Krause’s double bass and, in multiple registers, David Lackner’s tenor saxophone. Overlaid with dissonant sustained tones, the piece serves as an eloquent statement on loss, in which unresolved tensions coexist with spectral harmony. A coda of trills adds a sense of belated keening, which cuts off suddenly; the inference is clear.

A modal canon, played on the piano, alongside sustained tones from violin, played by Elori Saxi, are the main components of “Firn.” The canons begin to operate in phase as Saxi plays in successively higher registers. Partway through, Kasten-Krause adds low register octaves to the proceedings, which reach a significant level of syncopation. Gradually, the music returns to being in sync. The reference to early minimalism by Steve Reich is clear, but Evans is also concerned with creating a version of ambiance that pushes the genre’s envelope in terms of expressivity. touchless is touching.