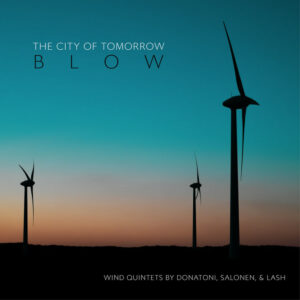 The City of Tomorrow is a woodwind quintet dedicated to 20/21 music, particularly compositions that explore environmental themes. They first convened to play the title work on this recording. Blow, by Franco Donatoni, is a tour de force for woodwinds. In addition to the obvious association with embouchures, the piece also explores the qualities of wind, from a soothing breeze to gusts to gale force. The use of counterpoint in polyrhythms reminds one of the formidable craft Donatoni possessed – and expected of the musicians who play Blow. The confluence of “wind painting” and proportional imitation, as well as the piece’s relentless energy, are thrilling in City of Tomorrow’s authoritative performance.

Hero and Leander, by Hannah Lash, also explores an environmental theme, if somewhat obliquely. The Greek myth involves Leander swimming the sea each night to reunite with Hero, only to be taken away by Poseidon in a vicious storm. In the wake of Tropical Storm Henri, and all the other hurricanes yet to come as climate change bears down on coastal communities, the piece has psychological resonances well beyond the archetypal tale of unrequited love. Hero and Leander is a nine-movement suite both varied in texture and harmony and unified by recurrent use of birdsong (played in piccolo and e-flat clarinet) and Poseidon’s heavy weather. Unlike Donatoni, Lash takes her time revealing the tale, with the calm before the storm just as emphasized as the lovers being kept apart. The last three movements bring Stravinskyian dissonances and clipped utterances (there are connections to his Oedipus)  and poignant stillness to the depiction of Hero’s grief at finding Leander’s body.

In 2003, Esa-Pekka Salonen wrote a piece dedicated to the memory of Luciano Berio: Memoria. It was premiered alongside Laborintus 2, Berio’s own work dealing with memory. Beginning with heterophonic overlap and moving to a main section of vivacious rhythms, the short motifs and shifting meters suggest Stravinsky. Later there is another Stravinsky connection in Memoria. The finale consists of chorales that recall the Symphonies of Wind Instruments. Salonen manages to channel two great composers of the twentieth century while imposing his own kinetic spin on the proceedings. Once again, City of Tomorrow impresses with its dextrous delivery and the silvery tone of its soloists. Recommended.