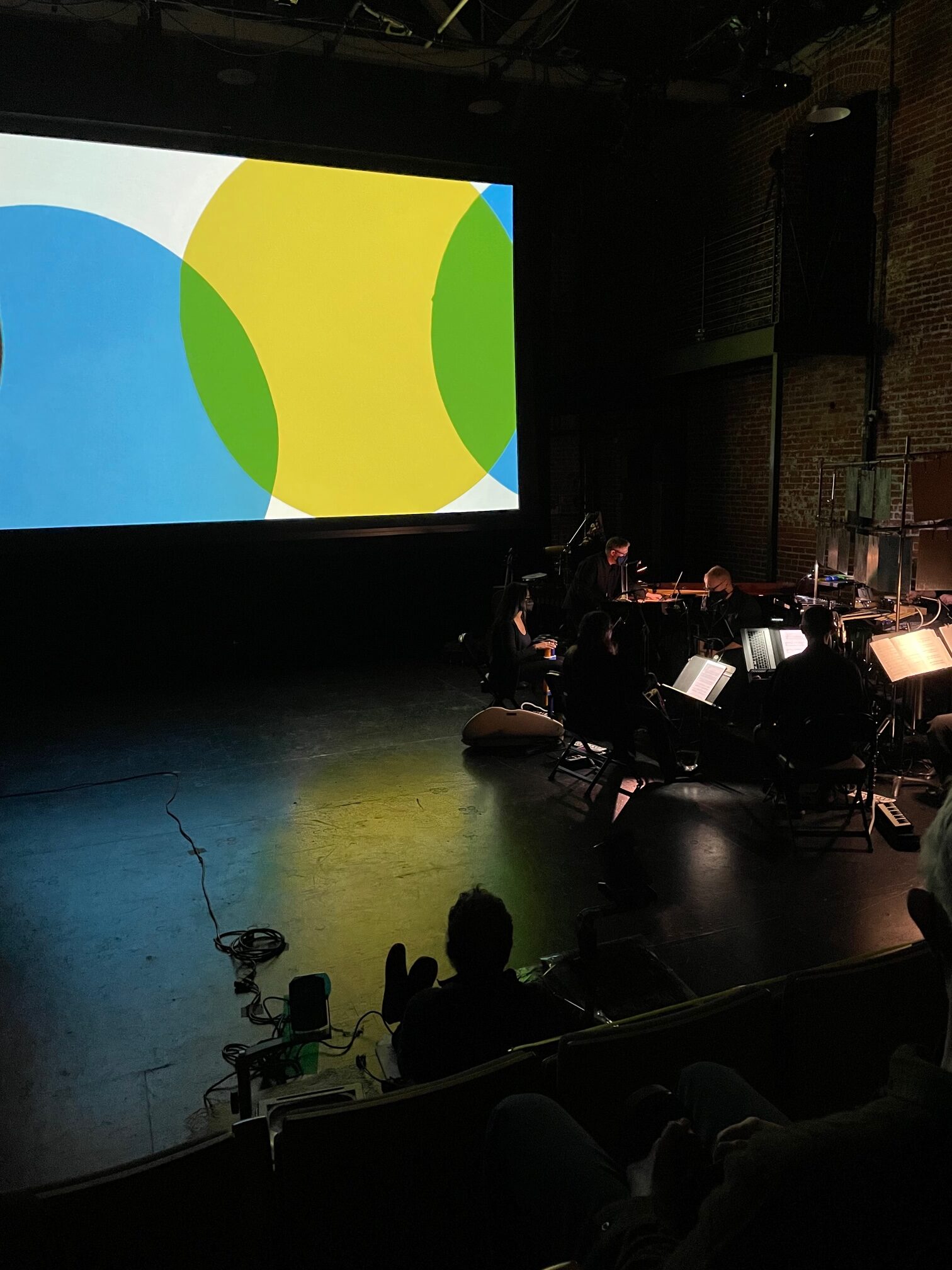 On January 8 and 9, 2022, Synchromy mounted two live concert presentations of Tierkreis L.A. Jason Barabba and eleven other local Los Angeles composers contributed new pieces inspired by the twelve original Tierkreis (zodiac) movements of Karlheinz Stockhausen. The Brightwork Ensemble was on hand to perform the music and the concert was accompanied throughout with artful cut paper and line drawing screen projections by Erik Ruin. The Ivy Substation Theater in the heart of Culver City was the venue and a lively musical preamble by SpacePants preceded the performance.

Tierkreis L.A. marks a bold beginning for the return of live concerts in 2022. The Omicron virus surge was in full cry, and had forced the cancellation of many public events. Synchromy, however, went ahead with the concert, restricting attendance to 50% with socially distanced seating and mandatory masking. Presentation of a vaccination card was required for admission.

Karlheinz Stockhausen (1928-2007) was a German composer and a leading member of the Darmstadt school, a group of composers that also included Pierre Boulez, Bruno Maderna, Luigi Nono. Stockhausen was active in the the mid and late 20th century in the fields of composition and musical theory. His works include pieces for solo instruments, songs, chamber music, choral and orchestral music as well as seven full-length operas.

Tiekreis, the German word for zodiac, consists of 12 individual pieces and was composed by Stockhausen between 1974 and 1975. Originally scored for twelve music boxes, each piece stands alone and can also be sung or played by any suitable instrument. Each is a simple, melodic characterization of the constellations in the zodiac, and Tiekreis proved to be one of Stockhausen’s most popular works. Tierkreis L.A. is based on the Stockhausen work and consists of two parts: an arrangement by Jason Barraba for chamber ensemble for each of the twelve melodies, followed by an original composition as written by twelve contemporary Los Angeles composers. Altogether Tierkreis L.A. includes 24 pieces of new music that stretches over two and a half hours.

Prior to the start of the concert, SpacePants – Jennifer Beattie and Diana Wade – entertained the incoming audience with dadaist-inspired poetry, vocals and vignettes, all built roughly on the zodiac theme. Volunteers from the crowd were encouraged to spin a carnival wheel that would come to rest pointing to one of the zodiac characters and SpacePants would perform a recitation or sing a vocal fragment that was related. A digital voice processor created some interesting effects and the singing by the two ladies was as impressive as their sparkly pants. A long, corrugated drainage tube, whose length could be stretched from three to over 20 feet, produced some of memorable moments when it was used to amplify the vocals. SpacePants manufactured just the right mix of the alien and the experimental, putting everyone in the perfect frame of mind for the music that followed.

The Tierkreis L.A. program consisted of twelve sections beginning with an arrangement of the original Stockhausen melodies by Jason Barabba for the Brightwork Ensemble. This was followed by a contemporary companion piece inspired by the zodiac segment. The ensemble consisted of piano, violin, cello, clarinets, flute, bass/baritone voice and a generous percussion section. A large projection screen displayed Stockhausen’s original text, and this was typically sung in German at the opening and repeated again in English when the segment concluded. Barabba’s orchestration from the existing source materials felt very much aligned with Stockhausen’s zodiac sensibility and the diverse instrumental textures of the Brightwork Ensemble served to compliment the warm and welcoming charm of the original.

Barabba also contributed a companion piece for ‘Leo’ titled Let Your Roar Be Heard or Do Aliens Have Astrology? The chamber ensemble provided a natural bridge – the timbres and textures overlapped nicely between the Stockhausen material and the new piece. There was a busy opening in the Barabba with fast phrasing in all the parts, but this settled into a proud and strong sensibility that complimented the regal leonine feeling from the Stockhausen. The projections on the screen were water color sketches of a lion in military regalia, and this captured the music perfectly. Barabba’s text, contributed by SpacePants, later became questioning: “Do aliens have astrology? Do they receive messages from the universe…” The music then turned from bold and confident to active and uncertain. Altogether this piece was a fine blending of text, music and images that worked together to amplify the original Stockhausen.

Other contributing composers fared equally well. ‘Scorpio’ was mysterious and spare with a high violin melody in the arranged Stockhausen that was beautifully played. Adam Borecki’s companion piece, S¢ø®¶πº took this further, and added a definite feeling of danger in his violin opening. The projected images reinforced this with an animated scorpion that moved malevolently about the screen in articulated segments. The Brightwork musicians all doubled on melodica for a time, increasing the sinister feel. The music and images together produced a surprisingly frightful experience.

‘Sagittarius’ began with a strong vibraphone line that was picked up by the piano in a jaunty melody. The screen displayed an animated archer shooting an arrow into the air which flew along for most of this segment. Vera Ivanova contributed a companion piece that began with an active, complex feel in the opening. As Ms. Ivanova explained in the program notes: “ When I was asked to write a piece based on ‘Sagittarius’, I had an idea to use as a framework for its form and instrumentation the pattern of alternating meters found in the original piece (5/4, 6/4, 7/4, 4/4, 3/4, 1/4, 2/4, 8/4).” As the intensity of the music increased, more arrows appeared on the projection screen as well as the side walls. The pace of the music was well-matched to the animations and built suspense as to where the arrows might land.

The ‘Gemini’ segment began with a playful feel in the wind instruments and confident optimism in the Stockhausen vocals. The companion piece, Perpendicular Twins, by Vicki Ray, paired the vertical harp and the plucked horizontal piano strings together with a bright pizzicato line in the violin and cello. This combination, along with increasing syncopation in the percussion, effectively added to a pleasing sense of buoyancy. The projections complimented with a series of large solid circles in vivid primary colors that slowly floated across the screen.

‘Capricorn’ completed the concert program and opened with the sharp click of castanets as well as a lovely flute solo. This nicely evoked the dark mystery of a winter night – the season of the year when the constellation of Capricorn is most clearly visible in the sky. Carolyn Chen’s companion piece, Birria, struck out in a much different direction, presenting the Angelino perspective, beautifully informed by our heavily Latin influence. Bírria is a Mexican a stew from Jalisco and this became the metaphor for the diverse and flavorful neighborhoods throughout the city. The piece opens with fast passages in the vibraphone with the winds and strings joining in to form a nice tutti groove. The images on the screen were very effective – animated drawings of landmarks and neighborhood scenes that were instantly recognizable and that seemed to grow directly out of the music. There was an intriguing combination of the exotic and the familiar throughout, and this resonated deeply with the locals in the audience. Birria was the ideal piece to send us out to experience the reality of the city having felt it anew in the music.

All of the zodiac companion pieces contributed by contemporary composers were artfully inventive as well as technically polished. The Brightwork Ensemble provided a common palate of timbres and textures giving a strong sense of unity to the entire Tierkreis L.A. program. The organization necessary to coordinate all the music, screen projections was heroic – the musicians had to rehearse, master and perform over two and a half hours of Stockhausen-inspired new music. A full list of the zodiac pieces and descriptions by all the composers is given here.

Tierkreis L.A. artfully combines the original inspiration of Stockhausen with new perspectives by twelve contemporary composers through a masterful performance by the Brightwork Ensemble.

Perhaps the greatest achievement by Synchromy is that the concert was performed at all. With all the uncertainties of the current Covid surge and the past two years of limited live performances, it took a special commitment to make Tierkreis L.A. a reality. This concert could be a turning point for the renewal of new music performances in Los Angeles as we move forward in 2022.

The Brightwork Ensemble is: